Appeal for Pakistani Christians caged like Christmas Turkeys in Thailand 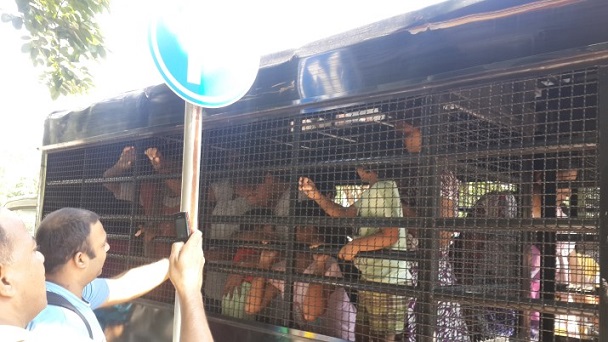 London: December 31, 2015. (PCP) A Christian human rights charity has called for help for Pakistani Christian asylum seekers caught up in a crackdown alleged to be linked to controversial claims of Islamic State terror operatives in Thailand. The British Pakistani Christian Association (BPCA) was appealing for funds to support the families and dependants of those arrested over the past few weeks, and for paying fines to stop some of them being sent to the notoriously brutal Bangkok Central criminal jail for overstaying their visas, after mostly women and children were taken away in crowded mobile cages to an even more crowded Immigrant Detention Centre and criminal jail. The arrest of these Christian asylum seekers seems to be linked to a massive crackdown that began earlier this month on foreign people who have overstayed their visas. Whilst the crackdown netted a US-Thai boxer and a Russian criminal wanted by Interpol on large-scale fraud and money-laundering charges, by far the greatest number of any nationality arrested were Pakistani’s, and a huge number of these, perhaps the vast majority, were Pakistani Christians seeking asylum. Some media reports said it came after Russian intelligence warned of a cell of ISIS terrorists who they said had entered Thailand in late October. However, Thai authorities said there was no evidence of such a cell. They did arrest four men, mostly Syrian, but released three of them without charge. BPCA chairman Wilson Chowhdry advised that Pakistani Christians were targeted in waves in the run up to Christmas, and close to 85% of those arrested were women or minors. He reports that on 17th December 14 were arrested, 6 women and 5 children, on Sunday 20th 17 were arrested, 9 of them children and 7 women, and on 22nd of 7 arrested, 3 were middle-aged women, a teenage boy, one man, and one elderly couple. He added: ‘Then, the arrests climaxed on Christmas Eve with a series of operations – seven in the morning, including five women, and a further 18 in the afternoon, 8 of them women and 8 of them children ranging from 3 months to 10 years old. Families have been broken apart. One pregnant mother was arrested with her three and eight year old daughters, but her husband was out working and her other daughter with a neighbour, and weren’t arrested.' The BPCA has just co-ordinated with other NGO’s and people on the ground, including Thai pastor Tong, Farrukh Saif and Voice of the Persecuted and on Boxing Day we have paid the ‘overstay fines’ of 11 out of 16 who had such fines imposed. Without these being paid, they would have been incarcerated in the infamous Central jail along with murderers and other criminals, a fate that still awaits the remaining five unless the funds can be raised to spring them from the trap. However, they will still be in incarcerated in the Immigration Detention Centre (IDC) where conditions are still horrifically bad, with massive overcrowding and very little nutrition. This includes pregnant mothers and children of all ages. The price for getting them out is much greater, at around £1000 per person, but if it is paid, it means they can’t be arrested again for at least two years.’ Unfortunately for now the bail system has been temporarily revoked while detainees are being investigated for terrorism, since the Erawan Shrine bombing. When asked about what Pakistani Christians were doing there in the first place, he stated: ‘These are mostly professional people, teachers and the like, who faced blasphemy allegations and other threats to their lives in Pakistan. They will have sold their possessions and homes and often had barely enough to pay for passage out to Thailand. In Thailand, though, they are still in a terrible state, forced to work in low-level jobs illegally. We have set up a school for their children, but these raids have forced us to move it.’ He said that BPCA’s co-workers in VOP summed up the legal situation nicely when they covered the events: ‘Thailand is not a member state of the 1951 Geneva Refugee Convention and the UNHCR has been powerless to protect them from arrest. The Thai government considers these persecuted believers as illegals in spite of the fact they’re documented registrants with the UNHCR as genuine asylum seekers. Asylum status often takes 5-6 years as they wait in fear to be resettled in a welcoming nation. They are unable to legally work and their children unable to attend school. These wait times are unbearably long, inhumane.’