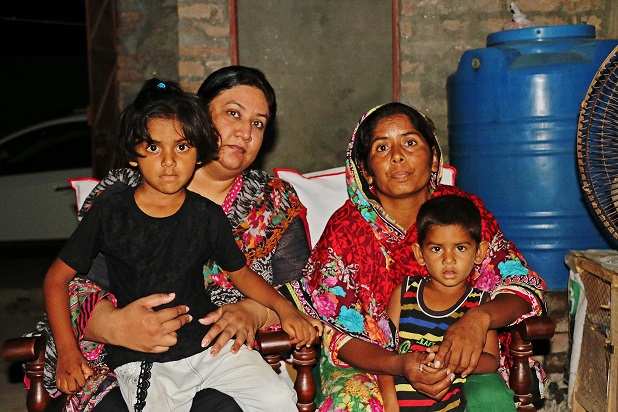 Lahore: July 7, 2019. (PCP) One Christian Saleem Masih resident of Shanti Nagar was implicated in a false blasphemy accusation on June 14, 2019, and was arrested by the Police on June 15, 2019. The accusation against Saleem Masih was that he entered his brother’s house (Muhammad Bilal) on 13th of June 2019.

The actual facts in this case are that Saleem Masih is having three brothers named Sabir Masih, Shakeel Masih and irfan Masih now Muhammad Bilal. Irfan Masih eloped with Sabir’s wife on 22-01-2019 and they converted to Islam to avoid any problems and litigation and got married to each other. Sabir’s wife Shakeela now called Ayesha after conversion wanted to grab the land of Saleem Masih, and therefore she was implicating Sabir, Saleem and their families into different false accusations from the time she converted to Islam with the help of their Muslim friends who helped their conversion to Islam. This property matter turned into enmity and resulted in this heinous allegation of Blasphemy because the perpetrators, Ayesha and Bilal knew that Saleem will never be able to come in their way after this allegation, so they decided to implicate him in Blasphemy case.

ON 13th June 2019 Ayesha and Bilal moved an application against Saleem Masih accusing him for entering their house illegally, (trespassing) stealing their precious house hold goods and tearing away and burned the pages of Holy Quran while the complainants were away and the house was locked in their absence. Bilal who is the younger brother of Saleem also said in his statement that due to the behavior of Saleem, Bilal and his wife Ayesha were already living in another town named pyara colony while their house in Shanti Nagar was locked that was looted and holy quran was desecrated in their absence.

The Voice team went to Khanewal (Shanti Nagar) that is about 370kms away from Lahore, did the fact finding and after knowing all the facts stated above, the Voice team decided to help the victim. The Voice’s legal team went to see Saleem Masih in District Jail Khanewal and also visited the Police station. The Station House officer Malik Adnan khursheed told The Voice team that they have almost finalized the investigation and will be submitting the report soon. The Voice is inclined to provide all sorts of legal support to the Victim and his family.