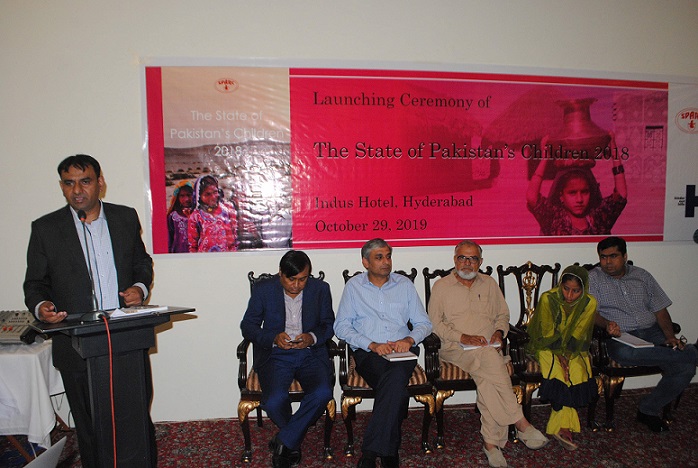 Hyderabad: October 29, 2019. (By Abbas Kassar) Society for Protection of Rights of Child (SPARC) annual flagship report” State of Pakistani Children in 2018” here on Wednesday. According to report submitted at seminar by executive director SPARC Sajjad Ahmed Cheema, child sex abuse cases reported all over Pakistan were 3832. As many as 22.6 million children remained out of schools in the year, among them 5 million were of primary level aged 5-9 years, 6 million 10-12 years age group of middle level and 11 million secondary level of 13-16 years. Province wise they were 9.9 million in Punjab, 6.6 million in Sindh, 2.2 million KPK and .8 million in Balochistan.

8.2 % children between age 10-14 are working as child labour.This number becomes 32.6% of children between age of 15-19 are involved in labour. 48% of children in Pakistan engaged in child labour are 5-11 years old,28% are in 12-14 years and 25% between 15-17 age group. Children are involved in harmful forms of labour. According to report 70.9% of total child labour force works in agriculture sector, 11.9% work in industrial sector and 17.2% work in non-informal unorganized sector.

As per report child marriage forms 30% of all marriages in Pakistan. Over 1.5 million children working and living in streets of Pakistan are on constant threat of violence like sexual abuse, trafficking and criminal activities. Over 1000 honor killings are reported every year in Pakistan. According to report Pakistan was placed at 150 among 189 countries in UN’s 2018 Human Development Index annual ranking. 40% of under 5 years children are at serious risk. 34% of children of 12-13 months did not receive all basic vaccines. P polio has been eradicated from all over world except 3 countries including Pakistan and Nigeria. 5500 children aged 0-14 years were living with HIV in country with 1400 newly infected. 38% children under age of 5 were reported of having fever. And despite free vaccination in Pakistan, pneumonia kills as many as 92000 children under age of 5 every year.