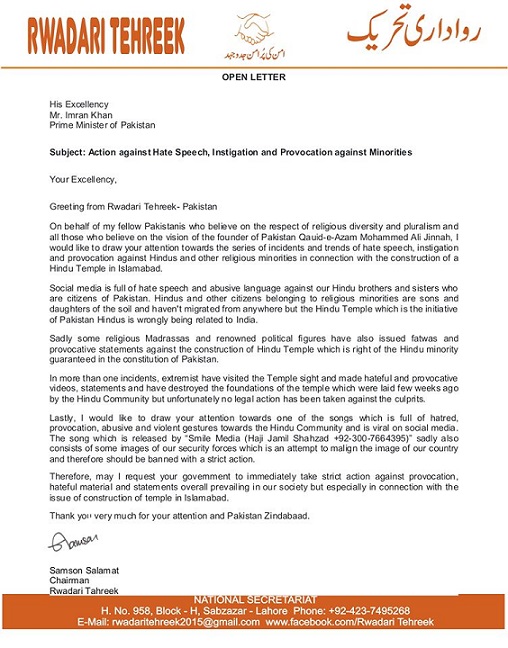 Lahore: Mr. Samson Salamat, Chairman Rwadari Tehreek has urged Prime Minister of Pakistan Mr. Imran Khan and his government for an immediate strict action to stop provocative and hateful campaign and statements in connection with the issue of construction of temple in Islamabad.

Mr. Samson Salamat in his Open Letter to Prime Minister has said that “on behalf of my fellow Pakistanis who believe on the respect of religious diversity and pluralism and all those who believe on the vision of the founder of Pakistan Qauid-e-Azam Mohammed Ali Jinnah, I would like to draw your attention towards the series of incidents and trends of hate speech, instigation and provocation against Hindus and other religious minorities in connection with the construction of a Hindu Temple in Islamabad”.

The Letter further states that “currently the social media is full of hate speech and abusive language against our Hindu brothers and sisters who are citizens of Pakistan. Hindus and other citizens belonging to religious minorities are sons and daughters of the soil and haven't migrated from anywhere but the Hindu Temple which is the initiative of Pakistan Hindus is wrongly being related to India.

Sadly some religious Madrassas and renowned political figures have also issued fatwas and provocative statements against the construction of Hindu Temple. Construction of their worship place is right of the Hindu minority guaranteed in the constitution of Pakistan and stopping the construction of the temple is breach of the constitutional rights. In more than one incidents, extremist have visited the Temple sight and made hateful and provocative videos, statements and have destroyed the foundations of the temple which were laid few weeks ago by the Hindu Community but unfortunately no legal action has been taken against the culprits”.

Mr. Samson Salamat has drawn special attention of the Prime Minster a song which is full of hatred, provocation, abusive and violent gestures towards the Hindu Community and is viral on social media which has been released by “Smile Media (Haji Jamil Shahzad +92-300-7664395)” and sadly also consists of some images of our security forces which is an attempt to malign the image of our country and therefore should be banned with a strict action.