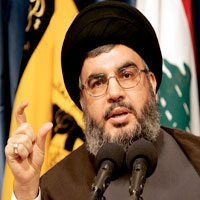 The Secretary-General of Hezbollah, Hassan Nasrallah, is one of the most powerful individuals within the entire Middle East despite his power base being firmly entrenched in the Levant. Indeed, the continuing evolution of Hezbollah under Nasrallah highlights the firm reality that this political movement can co-exist easily within the mosaic of the Levant and within secular structures. It is this pragmatism that irks America, Israel, Qatar, Saudi Arabia, Turkey, and the United Kingdom. France, while pandering to the destabilization policies of the above named nations aimed at overthrowing the government of Syria, is the one enigma because political elites in France know the organic nature of Hezbollah and how this movement is a firm reality within the political process of Lebanon.
Michel Aoun, a very influential leader within the Christian political community in Lebanon, knows full well that nations destabilizing Syria also have ill intentions against the people of Lebanon. Of course, Aoun and Nasrallah have vested interests within their own respective religious communities and further afield within the power mechanisms of Lebanon. However, unlike the growing menace of Takfiri jihadists to the entire Levant and the other “Gulf/Western cancer” that seeks to pull the strings; both Aoun and Nasrallah put Lebanon first and this applies to preserving the mosaic and unity of Lebanon.
Nasrallah and Aoun know full well that if sectarian Takfiri jihadists win in Syria then Lebanon will be next. Indeed, even if Takfiri jihadists obtain a major foothold then these fanatics will firstly be the stooges of Gulf and NATO powers that manipulate them. However, in time they will morphine and devour all and sundry. Of course, Gulf and Western powers know full well what they are doing because Afghanistan is witness to the unity of the above with primitive sectarian Takfiri jihadists. In time jihadist forces would enslave women, slaughter the Shia, destroy what is left of Buddhist architecture and then usurp traditional indigenous Sunni Islam based on Salafi thought patterns. In other words, Gulf and Western powers – along with the estranged Pakistan that destabilized itself – all helped to usher in “the Islamist year zero.” Today the people of Afghanistan and Pakistan are still suffering based on this barbaric policy that was enacted by America, Pakistan, Saudi Arabia, the United Kingdom, and several feudal Gulf powers.
Hezbollah therefore continues to denounce the brutal policies of traditional Gulf and Western powers. Also, in recent times both France and Turkey have joined the sectarian Takfiri and mercenary bandwagon. This can especially be viewed with events in Libya and Syria. Indeed, Turkey under Erdogan also joined the pro-Muslim Brotherhood camp alongside America and the United Kingdom in relation to Egypt and Tunisia. However, France is difficult to pin down because in Mali and Tunisia the elites in France didn’t want Islamists and jihadists to succeed.
Nasrallah warned about the threat of Takfiris by stating: “If these (Takfiri groups) win in Syria, and God willing they will not, Syria will become worse than Afghanistan.”
“If these armed groups win, will there be a future for the Future Movement in Lebanon? Will there be a chance for anyone other than (Takfiris) in the country?”
Nasrallah stated http://youtube.com/user/EretzZen about Afghanistan: “Consider the experience in Afghanistan. The jihadi Afghani factions fought one of the two most powerful armies in the world, the Soviet army, and it served it with defeat in Afghanistan.
However, Nasrallah continues: “Because there were some factions in Afghanistan that held this Takfiri, exclusionary, eliminatory, bloody, murderous thought (pattern)…the jihadi Afghani factions entered into a bloody conflict between each other…(jihadists) then destroyed neighborhoods, cities, and villages…such things were not even carried out by the Soviet army…And now, where is Afghanistan?”
“From the day that the Soviets withdrew from till today, bring me one day from Afghanistan where there isn’t killings, wounds (inflicted), displacement, destruction, and where there isn’t difficulty in living. Bring me one day in which there is peace, and happiness in life, because of these (groups)…”
Nasrallah similarly stated what are Takfiris doing in Syria against each other – never mind against the Syrian government? He says “…suicide bombings against each other, killing of detainees and prisoners without any mercy, mass graves, and mass executions.”
“Over what? What have they disagreed over? You both follow (Nusra and ISIL) the same methodology, same ideology, same doctrine, same direction, and same Emir (leader). What did they disagree over?
In other words Takfiris and jihadists in Algeria, Afghanistan, Iraq, Nigeria, Pakistan, Somalia, – and now in Syria – are killing, persecuting and destroying because all they know is hatred and “year zero.”
Nasrallah says: “This shows you the mentality that controls the leaders and members of these groups.”
This begs the question – why are political elites in America, France, Turkey, and the United Kingdom, supporting feudal Gulf states in Saudi Arabia and Qatar that seek to destroy various religious groups and cultures in the Levant?
INFORMATION SOURCE
Please visit Eretz Zen youtube channel at the following:
http://youtube.com/user/EretzZen – please search videos about Hezbollah
leejay@moderntokyotimes.com
http://moderntokyotimes.com