EFSAS commentary on “The potentially nocuous impact of the US withdrawal from Afghanistan on Jammu & Kashmir”. 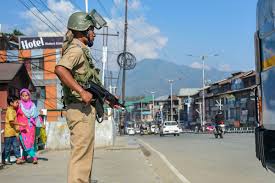 In its recently published commentary, “The potentially nocuous impact of the US withdrawal from Afghanistan on Jammu & Kashmir”, EFSAS comments on how the impending withdrawal of the US after 18 long and arduous years in Afghanistan and India’s decision to rescind the autonomy of Jammu & Kashmir (J&K) and bifurcate it into two union territories could have serious ramifications for the entire South Asian region. EFSAS explains how the narrative will play out with each of these events, as also how closely their impacts will be linked to each other in the months and years to come, will depend substantially on the role that Pakistan, as the common neighbour of Afghanistan and India, chooses to play. Neither Afghanistan nor India has much faith in Pakistan in view of the destructive role that the country has historically played in the region, and they believe that the Pakistani military establishment will persist with its policy of engendering violence, terrorism, and instability across its borders in order to keep itself relevant at a time when serious questions are being raised in Pakistan about its credentials and abilities.

EFSAS describes in its commentary how media reports over the last two days have quoted official sources as disclosing that recent intelligence inputs have suggested that in retaliation to India’s repeal of J&K’s autonomy through dilution of Article 370 of its Constitution, Pakistan was trying to push an estimated 100 battle-hardened Afghan terrorists into India. The terrorists had been brought to Pakistan Administered J&K, from where Pakistan planned to infiltrate them into the Indian side. Earlier this week, 15 such Afghan militants had been lodged at a terrorist launch-pad in Lipa Valley in Pakistan Administered J&K. These terrorists were being tasked by Pakistani intelligence operatives to carry out massive attacks in J&K as well as in other parts of India. Prominent political figures in J&K, Indian security forces, personnel of the J&K police, government buildings and schools had been identified as desirable targets.

The intelligence inputs also reportedly disclosed details of a meeting of “launch commanders” or terrorist handlers of the Pakistan-sponsored Jaish-e-Muhammed (JeM) terrorist group that had been convened to work out ways to push these Afghan fighters into India. The meeting was chaired by Rauf Asghar, brother of the outfit’s ailing chief Masood Azhar, in Bahawalpur in Pakistan on 19-20 August. The JeM and the Afghan Taliban are known to share a close and collaborative relationship.

EFSAS deliberates further on how a US withdrawal from Afghanistan could present a serious challenge for New Delhi, not just in terms of its geo-strategic interests in the region but also for stability and security in Kashmir. Visions of the dreadful years in the 1990s following the withdrawal of the vanquished Soviet troops from Afghanistan, when the Afghan mujahideen trained by Pakistan’s Inter-Services Intelligence (ISI) were re-routed to Kashmir in large numbers, would be flashing prominently in the Indian establishment’s memory banks. These Afghan mujahideen transformed the largely homegrown, albeit Pakistan-backed, insurgency in Kashmir into a ruthless terror machine. The degree of their penetration into Kashmir can be gauged from the fact that they made parts of the Kashmir Valley such as Sopore their own “liberated zones”.

In addition, Pakistan is still smarting from India’s controvertible move to dilute Article 370 of its Constitution and to bifurcate J&K. It is making desperate attempts to internationalize the J&K-issue, but barring support from China and an informal consultation on the issue at the United Nations Security Council`, has little to show for its exertions. Serious questions are, meanwhile, being raised in Pakistan over the role and effectiveness of the country’s military establishment that has hogged a bulk of the country’s budget over the decades on the pretext of protecting Pakistan’s interests on the J&K-issue. The military establishment has aggressively and consistently pushed the propaganda down the throats of the average Pakistani citizens that it was a foregone conclusion it would one day wrest Indian Administered J&K and integrate it with Pakistan. India’s move has belied such hogwash and left the Pakistani military establishment with egg on its face.

EFSAS concludes that if Pakistan genuinely has the best interests of Kashmiris at heart, as it invariably claims it does, it will surely desist from subjecting Kashmiris to the same fate that it has inflicted upon its own citizens. Inducting dreaded Afghan terrorists into J&K would certainly not be in the best interests of Kashmiris as it is they who would have to bear the brunt of the resulting human suffering.