Call for stronger action to end TB & tobacco, and prevent NCDs in Telangana. By Bobby Ramakant 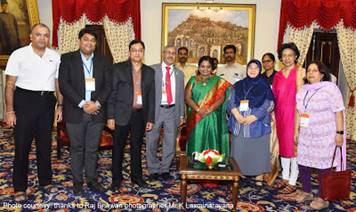 Several eminent doctors and public health experts delivered a memorandum to Governor of Telangana earlier this month, calling for stronger action to accelerate progress towards eliminating tuberculosis (TB) and tobacco use, as well as in preventing non-communicable diseases (NCDs). Telangana Governor who herself is a medical doctor Dr Tamilisai Soundararajan received the delegation on the last day of 50th Union World Conference on Lung Health in Hyderabad, India.

Dr Ishwar Gilada said: "Under your leadership as honourable Governor of Telangana, we look forward for the state to lead the country towards eliminating TB and AIDS; and preventing NCDs. Commitment to end TB by 2025 from India’s Prime Minister is the highest-level political commitment in our history to end TB. We do hope India will deliver on these promises of ending TB and AIDS and preventing NCDs, which are also enshrined in the National Health Policy of 2017 as well as UN Sustainable Development Goals (SDGs)."

He added "Every person living with HIV in Telangana should know their status (100%), receive life-saving antiretroviral therapy (ART) (100%) and have viral load suppression (100%). With effective HIV prevention (zero new cases of HIV), Telangana will advance towards ending AIDS by 2030. Every person with active TB disease should receive accurate and early diagnosis without any delay, especially those who are currently ‘missing’, and effective correct treatment so that TB is curable becomes a reality for every person with active disease in the state. The state should move towards zero new cases of TB, zero TB deaths and zero TB and HIV stigma and discrimination under your leadership, so do we appeal."

The memorandum submitted to Telangana Governor states: "As every case of active TB disease comes from the latent TB pool (40% of our population is estimated to have latent TB), we humbly appeal to Telangana state to accelerate progress on preventing TB (testing and treating latent TB) too, where no one is left behind. Although 40% of our population is estimated to have latent TB, immune suppression increases the risk of active disease. For people from high risk groups in which the risk for progression to active disease significantly exceeds that of the general population, the benefits of testing and treating latent TB are greater. Currently there are innovative and reliable testing options like new generation IGRA tests and there are new preventive treatment options to help TB programmes move to comprehensive test and treat latent TB algorithms."

Dr Surya Kant said: "Addressing malnutrition, diabetes, HIV, tobacco etc will also help prevent this progression. We also need to boost infection control in healthcare settings, communities and homes to cut the chain of TB transmission. Tobacco use increases the risk of TB and NCDs such as diabetes. Every tobacco related disease is preventable, and every tobacco related premature death could have been averted."

The memorandum submitted to Telangana Governor, called for effective implementation of all World Health Organization (WHO) recommended, evidence-based tobacco control strategies (including WHO FCTC & its Article 5.3) should help the state of Telangana to become tobacco-free. "We do appeal that the state moves towards zero tobacco related diseases and zero tobacco related deaths under your stewardship."

Dr Tara Singh Bam, Deputy Regional Director (Asia Pacific) of International Union Against Tuberculosis and Lung Disease (The Union) said: "Over 70% deaths are due to NCDs. There are WHO recommended, evidence-based measures that need to be scaled up across Telangana state for every citizen, to reduce the risk of preventable NCDs. Every citizen should have access to avenues for optimal physical activity; use public transport which is safe, strong, convenient and affordable; balanced nutritious diet with strict controls for unhealthy diet (like fast food and sugary drinks); ending alcohol use; breathing in better air quality; are some of the ways Telangana state can move towards making healthy living a reality for everyone."

Dr Gilada assured Telangana's Governor that AIDS Society of India (national professional association of HIV medical experts and scientists) and People's Health Organization are with the state of Telangana in letter and spirit in changing the current face of Telangana from high-prevalence state (TB-HIV, tobacco use) to an ideal state with healthy living for all.