Universal access to sexual and reproductive health services is a human rights imperative. By Shobha Shukla 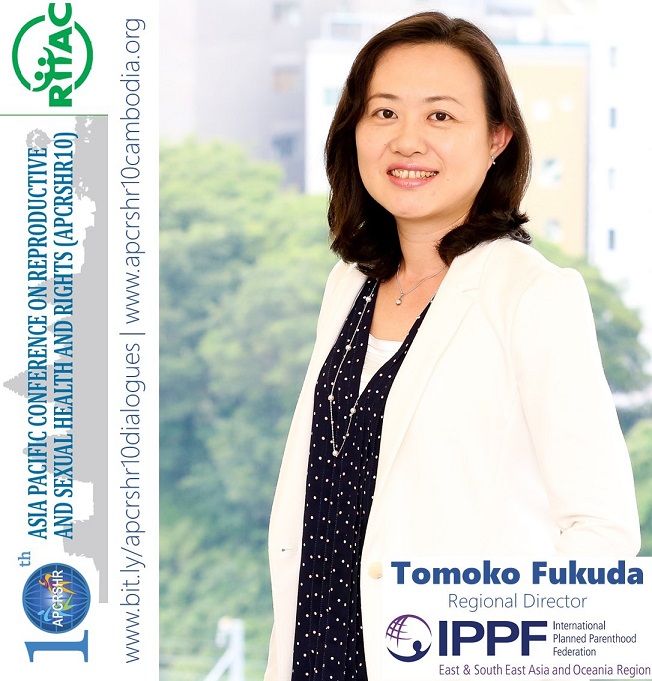 The Asia Pacific region is home to more than half of the global population and many low-income countries. While the region is witnessing rapid economic growth, gender inequalities persist and sexual and reproductive health (SRH) services are far from being available to all. In the lead up to this year's International Women's Day and the forthcoming 10th Asia Pacific Conference on Reproductive and Sexual Health and Rights (APCRSHR10) in Cambodia, CNS Managing Editor Shobha Shukla spoke with Tomoko Fukuda, Regional Director of the International Planned Parenthood Federation (IPPF) for east, southeast Asia and Oceania region, on advancing gender equality and universal access to sexual and reproductive health and rights in this region.

Here are some excerpts from the interview:

Why is universal and rights-based access to sexual and reproductive health information and services, key to achieving sustainable development goals (SDGs)?

Tomoko Fukuda: Gender equality, and sexual and reproductive health and rights (SRHR), both are vital to achieving the SDGs by 2030. In fact, SRHR is an important component of SDGs-especially SDG-3 and SDG-5. Likewise, the Nairobi statement of ICPD25 also commits to achieve universal access to SRHR information and services by 2030. Therefore it is essential that SRHR becomes the fundamental driver to achieve the SDGs. Women form more than 50% of the population. So unless women have access to quality healthcare and their human rights are protected, we cannot achieve any of the SDGs.

Where are we in the Asia Pacific region on SRHR, in terms of the 2020 realities and the 2030 SDG targets?

Tomoko Fukuda: The region has made great progress in terms of maternal and new born health, and awareness around contraceptives, family planning and HIV/AIDS, but there still are many areas that need more attention, especially in terms of providing the full spectrum of quality SRHR services to all, preventing unsafe abortions and accessing safe abortion services. Also, the right to control one's own body and discussions around sexuality and diversity in sexual orientations and gender identities have not been looked into in relation to what we have achieved in terms of maternal and child health care and family planning services.

Many countries in this region have developed economically, but economic growth has not resulted in gender equality and improvement in SRHR services. Then again, we have populations like migrant workers, internally displaced persons, undocumented citizens or even unmarried single parents who are being left behind. In Japan we recently had an issue where unmarried single mothers could not receive the same benefits as those who were married, divorced or widowed. These inequalities are there which we still have to tackle.

What are some of the top priority SRHR issues in the Asia Pacific region?

Unplanned pregnancies: One of the biggest issues to tackle is unplanned and unintended pregnancies, especially in young people. This has resulted in what we call baby dumping in countries like Malaysia and Japan where unwanted infants are born to adolescent school-going girls and then thrown away. We have to ensure that girls and women have access to contraceptives and they are able to make informed choices about their bodily autonomy. There is need for comprehensive sexuality education for young people so that they get correct information on reproductive health early on, and are able to access services that will prevent them from having unintended pregnancies.

Gender and social inequity: It persists even in the rich nations of the region, like Japan. It is not just about inequities between urban and rural areas, or between the rich and the poor, but also inequitable access to SRHR services. Rich people may still have no knowledge about SRHR or they may belong to very traditional communities where they are not able to come out openly with regards to their sexual identity and their sexual and reproductive health needs. On other hand, people living in slums or unauthorised settlements in urban areas may not have access to government health services that are there for other communities.

Child rape: It is appalling to see that incidences of childhood rape cases are increasing in some of the region’s countries. We have to raise more awareness on this issue and also collect data. People often try to hide such incidents and when we try to hide them, there is no way to tackle them openly. Very often governments also do not want to raise this issue. If we have stories and data to support it, that will make our cause even stronger. Perhaps the APCRSHR10 (10th Asia Pacific Conference on Reproductive and Sexual Health and Rights) platform can give us an opportunity to develop an initiative, similar to the #MeToo movement, and use social media to become the voice of these innocent and voiceless child victims.

Humanitarian /natural crises: Natural disasters and post conflict situations impact sexual and reproductive health services, and women are the worst sufferers. And yet more often than not they are neglected. Many member associations of International Planned Parenthood Federation (IPPF) are now working with governments, especially in countries like Myanmar, Philippines, Indonesia, and Pacific islands, so that in times of humanitarian crises they are part of the local networking and a part of the conversation to ensure that sexual and reproductive health services are accessible.

Vulnerable communities: We also have to look into the SRH needs of people with diverse sexual orientation and gender identities; people with disabilities-both physical and psychological and also the ageing populations, as many countries of the region, like South Korea, Japan, China, Thailand and Vietnam are ageing very fast.

What are the challenges in advancing SRHR in the region?

Tomoko Fukuda: People (including donors) assume that once countries develop economically, SRHR issues will also be solved. But this is not true of most countries of the region, including Japan. Donor interest has shifted from the region on the false assumption that since these countries have developed economically, SRHR issues too have been taken care of. This is a challenge for us. We have to raise our voices to say that SRHR is still very much an issue in various forms in all the countries of this region and that we need continued donor commitment to tackle it.

Different countries have different problems. In countries like Thailand, Cambodia, Vietnam, Indonesia, and Malaysia, one of the key issues now is of migrant workers. Many of these migrant workers are not registered or documented. Hence they may not have full access to healthcare in terms of universal health care policies or insurances that are available for the citizens of that country. Sometimes high cost of health services and/or language can be a barrier. Working with migrant workers on SRHR is an emerging issue that still needs to be tackled here.

In the Pacific Islands, the sheer difficulty of reaching people living in far away and hard to reach islands, makes accessibility to sexual and reproductive health services a difficult task. There is lack of human resources too.

What is the way forward?

Tomoko Fukuda: A lot of the problems that plague the region relate to the diverse cultures, social norms and age-old traditions. The key point is for women to come together, form community based groups, local groups and also to make a coalition at the national level and ensure that women’s voices are raised and are delivered to the governments. We also need to work more with women’s gender rights groups and feminist groups and not only with the health sector.

All discussions around population and development should focus on women and sexual and reproductive health and rights. We have to work more with our politicians and parliamentarians and ensure that they approach these issues in a rights based manner.

All of this requires a multi-stakeholder approach. International organizations, local/regional NGOs and media-all stakeholders should come together to create a mechanism for monitoring progress and a platform where we can raise our voices collectively to push governments towards contributing to this. This must go hand in hand with our push for universal health coverage.

What is your message for International Women's Day (#IWD2020)?

Tomoko Fukuda: I really like the theme for this year's International Women's Day:"An equal world is an enabled world." It says a lot about empowering women to be able to have correct information and take action on whatever choices they make. If a woman is not enabled to make choices about her own body how can she be able to become equal in this world? It is no easy task to make women to be able to make choices and be able to be equal in an unequal world. We cannot put all the women in one basket. They come from different cultures, different social norms and different family situations and enabling them is not as easy as just one word. We need to be sensitively aware of the difficulties that prevent women from making and exercising their choices, so that interventions can be tailored appropriately according to their needs.

(Shobha Shukla is Managing Editor of CNS (Citizen News Service) and has extensively written on health and gender justice. Follow her on Twitter @shobha1shukla or visit www.citizen-news.org)