Growing call for federal democracy in Myanmar. By Constanze Ruprecht and Bobby Ramakant 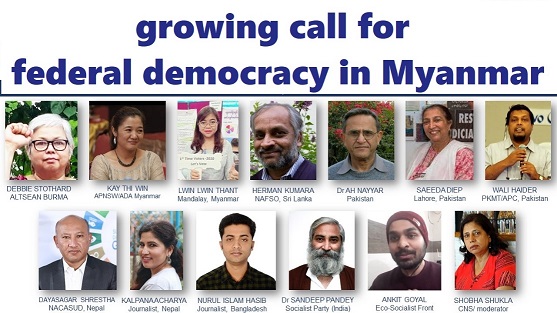 There is a unified call on the Burma Army to immediately cease all forms of violence and human rights abuses against civilians throughout the country; immediately withdraw troops back to their barracks in all areas and reinstate the civilian government; and immediately step down and enable the drafting of a new, federal constitution. The joint statement condemned the military for their actions during this coup and longstanding blatant disregard for international human rights standards. They continue to suppress and persecute human rights defenders, activists, and ethnic and religious communities.

The statement supports all pro-democracy, civil society, and ethnic groups against the military dictatorship. “Together with them we reject the 2008 constitution, created in a deeply flawed process and aimed to uphold military control.”

It further calls upon “countries of South Asian Association for Regional Cooperation (SAARC) and the Association of Southeast Asian Nations (ASEAN) to condemn this coup d'état and, instead of choosing economically motivated non-interference, stand up for their commitment to uphold international human rights standards.”

The joint statement calls upon the United Nations Security Council to unequivocally hold the Burma military to account, by establishing a global arms embargo and sanctions on the military regime and their cronies; and refer the situation of Burma to the International Criminal Court (ICC), to address decades of impunity for human rights abuses, including genocide, crimes against humanity (including sexual and gender-based violence) and war crimes.

It calls upon the international community to:

demonstrate their resolve through actions, protections, and standing together with the people of Burma and civil society groups to uphold democracy and human rights,

use cross-border channels to provide aid directly to conflict-affected communities,

demand that telecoms providers take a stand to provide safe, open channels of communications for the public, and,

Herman Kumara of National Fisheries Solidarity Movement of Sri Lanka demanded that elected government be reinstated, and civil, political, and economic rights of the people in Burma be ensured.

Khin Cho Myint of Burma Study Center stated that global solidarity is needed to take serious action against military coup leaders and their crimes. “Please support our return to democracy in Burma.”

Cheatlom Ang of CamNature Institute in Cambodia commented “We strongly support the people of Burma to fight against military coup and call for returning the power to people to reinstall civil government for the country.”

Tahmina Rahman of Bangladesh Apparels Workers Federation (BAWF) condemned the military coup and called for “immediately withdrawing troops back to their barracks in all areas and reinstate the civilian government.”

Dr Sunilam, former Member of Legislative Assembly and a senior social justice activist with Kisan Sanghrash Samiti, Samajwadi Samagam, India, said “We fought for restoration of democracy against the military Junta but again they have grabbed power. This time we need a permanent solution.” Sustainable development and peace are rooted in democracy and a just world order.

(Constanze Ruprecht and Bobby Ramakant are civil rights and social justice activists, and part of organizing team for solidarity forums for federal democracy in Myanmar)