Are we hungry for change for genuinely transforming food systems? By Shobha Shukla 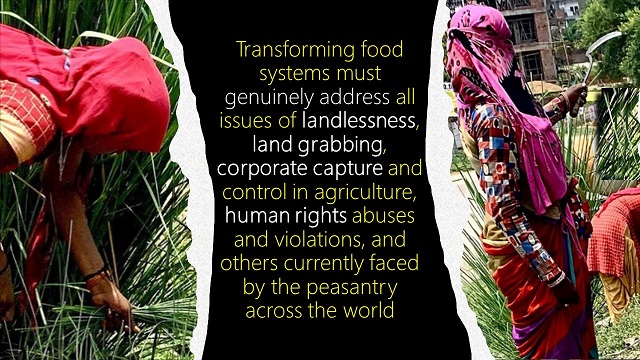 Description automatically generated with medium confidenceabetting corporate grabbing of land and resources, which is pushing farmers out of agriculture. Corporations are exercising more and more control over food and agriculture and influencing public policies. The forthcoming United Nations Food Systems Summit 2021, tentatively to be held in September 2021 and convened by the Secretary-General of the United Nations, purports to transform the way the world produces and consumes food, and leverage these actions to deliver progress on all the 17 Sustainable Development Goals (SDGs).

However, one fears that with UN Secretary General’s Special Envoy to the Food Systems Summit, Agnes Kalibata running the show, the Summit will promote corporatisation of food systems and corporate control of agriculture. Kalibata is President of Alliance for a Green Revolution in Africa (AGRA) whose role in Africa has been very detrimental to small and landless farmers, women and youth. This shows that the UN Food Systems Summit will bring together extractive policies of neoliberalism (that have been around for nearly three decades) and ensure that not only the production but also consumption of food is kept in the hands of corporations who will be the main beneficiaries of corporate capture policies, warns Azra Sayeed, Chairperson of International Women’s Alliance as well as of Asia Pacific Research Network.

"The global order is at the brink of collapse as there is no sustainable livelihood, let alone decent livelihood. People do not have any social security network. Along with the climate, economic and food crisis we are now in the grip of a health crisis too. The Covid-19 pandemic has escalated the misery of the people and shown the vulnerability of our current food systems", she says.

Simone Adler, Co- Director of Pesticide Action Network (PAN) North America gives another example of UN’s turncoat policy on a just and equitable food system. In October 2020, UN's Food and Agriculture Organization (FAO) signed a letter of intent to formalize a partnership with CropLife International - a global trade association whose member corporations include the world’s largest agrochemical, pesticide, and seed companies. These companies produce and promote pesticides, including highly hazardous ones. More than 35% of CropLife member sales come directly from sale of highly hazardous pesticides. A recent study estimates that there are 385 million cases of acute pesticide poisoning every year. The pesticide companies also export products banned in their own countries to the global south-where their pesticide sales are even higher. So there is every likelihood that this Alliance would impede global efforts to phase out and ban hazardous pesticides by 2030. The Alliance also threatens to undermine people’s food sovereignty and profit at the expense of farmers’ lives and livelihoods, fears Simone.

FAO is already collaborating with CropLife to dispose off the obsolete stockpiles of pesticides. It is preposterous that a UN agency charged with reducing hunger and supporting farmers and rural communities around the world, formally aligns with an industry that is devastating people and the planet.

There are examples where governments of our countries worldwide have adopted policies as part of UN legally binding treaty to kick out industry interference from public policy. For example, the global tobacco treaty (formally called the World Health Organization Framework Convention on Tobacco Control or WHO FCTC) which has been ratified by over 180 countries, has strong Article 5.3 to stop tobacco industry interference in health policy. WHO FCTC also has Article 19 to hold tobacco industry legally and financially liable. We need stronger binding rules to not let industry water down or derail efforts to keep people before profit.

No wonder, activists call it a toxic alliance, as it facilitates pesticide industry’s influence on global food systems and goes against UN’s mandate for promoting a just and resilient food system. A global campaign called Stop FAO-CropLife #ToxicAlliance, coordinated by Pesticide Action Network Asia Pacific (PANAP or PAN Asia Pacific) and PAN North America, demands that FAO must sever its formal alliance with CropLife International before the UN Food Systems Summit and implement a policy to prevent conflicts of interest. Several organizations and networks representing farmers, fisherfolk, agricultural workers, indigenous peoples, scientists and social justice organisations from many countries, have written to the Director General of FAO to stop this Alliance, shares Simone.

Bill Gates has also come in for a lot of flak for its land grabbing and corporate capture activities hidden beneath its philanthropic activities. Although he projects himself as a friend of small farmers, Bill Gates is the largest private farmland owner in the USA and owns 100,000 hectares of land spread across 19 states that were purchased by his Gates Foundation Trust via Cascade Investments. Outside of US also he has been investing indirectly through private equity funds that own farms in East and South Africa. This is very typical of how billionaires function, says Devlin Kuyek, a researcher at GRAIN. They try to separate how they invest their money and how they portray themselves, Kuyek said. Gates' philanthropy runs through his investments. 7000 of his family offices control nearly USD 6 trillion in assets. They have been increasingly acquiring farmlands around the world.

According to Kuyek, "This massive acquisition of farmlands has a direct bearing on climate change also, as industrial agriculture contributes to at least 1/3 of global green house gas emissions and is a major contributor to climate crisis. However, corporations, which acquire farmlands on behalf of billionaires, are selling these farmland investments as green-using them as a punching fund to make their portfolio look more 'green' - like moving some funding from fossil-fuels investments to farmland acquisition as if that is helping reduce climate crisis. They are also positioning farmlands for carbon projects - through what they call regenerative agriculture - a sort of green washing that fossil fuel companies and agri-based food companies are deeply involved in."

Moreover digitalisation of agricultural land records is making transnational farmland ownership easier and more open to profit. It allows foreign companies to easily identify and access farmlands that they can take over and then use satellite technology to keep an eye on the hired farm operators that they do not cheat them out of the harvest.

Neth Daño, Asia Director at the ETC Group, gives yet another example of usurping people’s food system by CGIAR (formerly the Consultative Group for International Agricultural Research) - a global partnership that purports to unite international organizations engaged in research for a food-secured future. CGIAR was earlier hosted by World Bank, but now it is largely controlled by Gates Foundation- its top funder.

“Its annual budget is USD 850 million largely to provide salaries and support lab work of 1500 scientists and researchers. It has 11 international gene banks that are legally under the auspices of FAO. They contain about 773000 types of seeds collected from developing countries over the decades. So these seeds kept in the gene banks that are now owned by the company have actually been pirated from farmers (before the Convention on Biological Diversity or CBD was formally adopted) without consent from the communities from whom they were taken. Moreover, all these gene banks that are under the mandate of CGIAR are now actually in the power of Gates Foundation. So you have this brazen interlinking between the two, with Gates Foundation creeping into publics institutions and shaping policies. Also transnational corporations have benefitted from researches conducted at CGIAR around seeds and agri-chemicals. CGIAR still holds substantial influence on food systems in many developing countries”, adds Neth.

Abbas Melhim, Executive Manager of Palestinian Farmers Union, rues that, “Military occupations are destroying the sovereignty of farmers. Small scale farmers must have sovereignty over their production to be able to produce the food they want and not become dependent on big corporations. For this they should have control over the resources - water and land - needed for food production. But in war-torn nations, like Palestine, these resources are under the control of occupation forces. So they are struggling to be able to produce food based on the demands of the people rather than those of big corporates for international markets.”

But even in many non-conflict countries, corporate grabbing of land and resources, and anti-farmer policies of governments are rampant and trying to push small farmers out of agriculture. Agricultural land is also often converted for non-agrarian purposes in the name of developing special economic zones.

However, farmers are now understanding how industry is trying to take over their livelihood for its own gains. A case in point is the farmers’ movement in India that has been going on for more than 7 months, against 3 contentious Farm Bills forced passed by the Indian government in September 2020. These three legislations, purportedly called reforms to help the farmers, would actually put them at the mercy of giant corporations. They will loosen government regulations on agriculture and allow the corporates to deal directly with the farmers, opening up the agriculture sector at both ends – production (through contract farming) and sale (through complete deregulation). Farmers see these neoliberal farm laws as a potential death blow and fear that they would throw all the marginal farmers, who form 85% of the total farming community, to the mercy of private players, and ruin their livelihood which is already under severe strain.

Small farmers who produce the vast majority of food on this planet own the least amount of land - less than 25% of global farmland is owned by small farmers. The fight for them is to take back control of water, land-they-till and other resources that are needed to produce food. Covid-19 has shown that if communities have even a small piece of cultivable land, they will have some food on their table and not die of hunger. Moreover, when almost the entire world went under lockdown it was these farm workers and farm labourers who continued to produce food which we are consuming in our homes and cities around the world.

We must continue to strengthen farmers’ movements at every level and support them in their struggles to take back and maintain control of the land-they-till and their food production.

Keeping this in mind, many movements and alliances have come together to launch the Global People’s Summit on Food Systems as a rebuttal to the the UN Food Systems Summit. The Global People's Summit puts the voices of the people - farmers, women, marginalised communities - at the forefront and demands just, equitable, healthy and sustainable food systems. It is not just about food security but also about food sovereignty in order to have a just, healthy and equitable food system for a world without hunger.