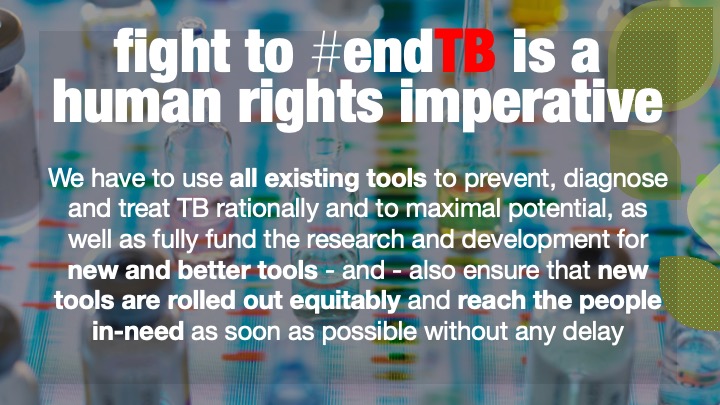 Is it not a paradox if a preventable, diagnosable, treatable, and curable disease becomes a top killer? Till Covid-19 struck our world, Tuberculosis (TB) - a disease that can be prevented, diagnosed and treated - was the most deadly infectious disease worldwide. Covid-19 pandemic has also adversely impacted the fight against TB, as well as other diseases. Not surprisingly, the latest Global TB Report 2021 paints a grim picture of the TB disease burden, with the Covid-19 pandemic acting spoilsport and further jeopardising the progress on all fronts of TB prevention, diagnosis, treatment, care and control.

Despite growing efforts spanning over several decades, most of the world was not able to satisfactorily prevent TB, prevent conversion of latent TB into active TB disease, diagnose the disease timely or put all those diagnosed on effective standard treatments - and most importantly, avert untimely deaths.

Why are we off-track on most TB targets?

During the Covid-19 pandemic, another global health threat that has become even more severe is of TB. We are off track on most of the global TB targets, such as, the goal to end TB by 2030 which is enshrined in the United Nations Sustainable Development Goals (SDGs), or the targets of the World Health Organization (WHO)'s End TB Strategy, or promises made in the 2018 Political Declaration of the UN High-Level Meeting on TB.

We missed to deliver on TB promises for 2020

Will new better tools to diagnose and treat TB, zoom us towards #endTB targets?

Concerted efforts at all fronts, including scientific breakthroughs, are crucial to break the chain and end TB by 2030. Providing a glimmer of hope, several advances in the field of TB care and control were presented during the recent virtual 52nd Union World Conference on Lung Health. Here is a glimpse of some of these exciting researches for TB diagnosis and treatment:

Bern Thomas Myanga, Medical Director of Nobel prize-winning Medicins Sans Frontieres (MSF or Doctors Without Borders), UK, and Chief Investigator of the TB-PRACTECAL Trial, reported results of the MSF-led first-ever multi-country, randomised, controlled clinical phase 2/3 study on the efficacy and safety of the all oral, 24-week BPaLM (bedaquiline, pretomanid, linezolid, and moxifloxacin) regimen against the standard of care treatment for rifampicin-resistant TB. The study was conducted at 7 sites across Uzbekistan, Belarus and South Africa.

The new treatment regimen was found to be safer and more effective for patients with rifampicin-resistant TB than the current accepted standard of care that lasts for 9 to 24 months. 89% of the patients in the BPaLM group were cured, compared to 52% in the standard of care group. Tragically four patients died from TB or treatment side effects in the control group, while there were no deaths or failures in the new regimen arm. In addition, study results showed that the new drugs lead to a significantly lower rate of major side effects, with 80% of patients avoiding any major side effects compared to 40% in the control group.

A study done in Peru, used genome sequencing to effectively predict strains of drug-susceptible TB that were likely to develop drug resistance in future.

Whole-genome sequencing was performed on 3000 sputum of samples of all patients presenting with TB symptoms at health centres in Lima, Peru, over a period of 17 years. Whole-genome sequencing was performed on each of these samples-whether of drug-susceptible or of drug-resistant TB. The researchers looked at drug-susceptible bacteria and aimed to identify mutations that would increase the probability of a bacteria becoming resistant in the future.

Presenting the study data, lead author Arturo Torres Ortiz, a researcher from Imperial College London, shared that, "We looked for any signs in drug-susceptible bacteria that they will become resistant in future. We identified those 'signatures' and saw that once the bacteria acquires resistance to one antibiotic, it is more likely that they will keep acquiring resistance to other antibiotics. We found that if the bacteria become resistant to isoniazid then they are upto 15 times more likely to acquire further resistance to rifampicin. We identified specific polymorphisms that can be used to make a molecular test in the future to tell us whether this drug-susceptible bacteria will become resistant in the future. This could be a potential game changer for preventing multidrug-resistant TB (MDR-TB)."

The mutations confer “pre-resistance”. Monitoring these mutations could prevent the amplification of drug resistance in the population by targeting those bacteria more likely to become resistant”, he added.

Molecular testing for TB in children with severe pneumonia

Although TB in children commonly presents with symptoms mimicking pneumonia, its diagnosis is usually considered only if they have repeated antibiotic treatment failures or if symptoms have been present for long. Thus diagnosis of TB in kids is often missed or delayed, causing high mortality in them as they cannot access treatment because they are not diagnosed, said Dr Olivier Marcy, Research Director, University of Bordeaux. He was presenting the results of the TB Speed Pneumonia study on the yield of systematic TB molecular testing performed on nasopharyngeal aspirates and stool samples in children with severe pneumonia in countries with high TB incidence. The study investigated if offering systematic molecular testing for TB in all children with pneumonia is feasible and whether it will affect mortality.

“These are important findings. Although we have more and more data that TB is frequent in children with pneumonia, the guidelines and clinical practices are not taking this information into consideration. So we need to have better tools to detect TB in this group. Getting nasopharyngeal aspirates from them is not difficult. So it is important to convince doctors around the world that they can use this technique to diagnose TB in children”, he emphasized.

The sensitivity and specificity for artificial intelligence are very high (0.935 and 0.971 respectively), which show that the AI-tool performs well for diagnosis of active TB disease and differential diagnosis of active TB disease and pneumonia. It can be implemented with minimal need for human intervention. However, while presenting results of this study, Dr Fleming Lure investigator of the study cautioned that, “AI can function as a second pair of eyes. It does not replace the humans but provides references for healthcare professionals to make a final diagnosis. Also, this small study lays good groundwork for the future of AI in the large clinical evaluations and simplify the diagnosis process”.

109 months are left to end TB worldwide: will new tools be pivotal?

The fight to end TB is a human rights imperative. We have to use all existing tools to prevent, diagnose and treat TB rationally and to maximal potential, as well as, fully fund the research and development of new and better tools - and - also ensure that new tools are rolled out and reach the people in-need as soon as possible without any delay.

(Shobha Shukla is the award-winning founding Managing Editor and Executive Director of CNS (Citizen News Service) and is a feminist, health and development justice advocate. She is a former senior Physics faculty of prestigious Loreto Convent College and current Coordinator of Asia Pacific Regional Media Alliance for Health and Development (APCAT Media). Follow her on Twitter @shobha1shukla or visit www.bit.ly/ShobhaShukla)