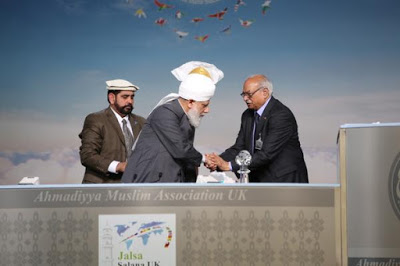 Lahore: August 29, 2015. (PCP) As Punjab Assembly passes resolution of condemnation on comments of former High Commissioner of Pakistan in London Wajid Shamsul Hassan in Ahmadiyya Peace Conference in Alton, UK, on August 23, 2015, issues a statement of clarification to newspapers. In his speech in conference, he argued that Islamic Republic of Pakistan is not true Pakistan of Mohammad Ali Jinnah nor dream Pakistan of Allama Iqbal who vision Pakistan as liberal democratic state but historical facts turned sour when section of Pakistani print media portrayed it as blasphemous. More than 35 thousand delegates of Ahmadiyya community from 97 countries joined this conference where Mirza Masroor Ahmad was declared as new Caliph. The conference was broadcasted by Ahmadiyya Television live in more than 200 countries which is claimed to be viewed by millions. Meanwhile, three days Ahmadiyya Conference starting in Canada will be addressed by Prime Minister Harper according to media reports. The speech of former Pakistani envoy in London was not much objectionable for Islamic clerics in Pakistan than his bowing photo flashed in International media while received by head of Ahmadiyya community leader. In clarification notes, Wajid Shamsul Hassan said “I attended the Ahmadiyya Peace Conference in Alton in my personal capacity and my entire speech centred around the Kalima “Lal e La Ha Illal Lah Muhammudur Rasool Allah”. “Love for all, hatred for none” was theme of the conference. I made a few minute-long speech in which I reiterated that Islam is religion of peace, its Prophet (Peace Be Upon Him)— Khatumul Nabeen - was Rehmatul Lil Alameen - blessings for the entire humankind and I elaborated — irrespective of caste, creed, colour or gender. I made it a point that Pakistan did not come about because Islam was in danger in British India — where all religious communities could practice their faiths in full freedom. “This has a historical context. After the unsuccessful war of Independence in 1857, Muslims from the position of ruling class had receded to be ”hewers of wood and drawers of water”. They had been outnumbered by better educated Hindu majority — that had changed itself with the onset of industrial revolution, monopolised employment and in business. It was Sir Syed Ahmed Khan who dragged Muslims out of their mire of decadence and equipped them with modern sinews for progress. Like Quaid and Allama Iqbal, he too was abused and condemned by the Muslim clerics of his time. It was he to declare first that Hindus and Muslims were two nations especially for economic reasons in 1893 in Viceroy’s Legislative Council. “Though an Indian nationalist and a secularist to the core, Quaid-i-Azam Muhhamad Ali Jinnah opted for Independent Muslim homeland only after Jawaharlal Nehru showed his true communal colour following June 3 Plan of 1946, as such, one would not come across to mention of the word Pakistan in Allama Iqbal’s speech of Allahabad in 1930 nor it appears anywhere in All India Muslim League’s Lahore Resolution of March 1940. “I have indulged in this digression to state that my speech was essentially in historical context especially when the Quaid is being distorted in various moulds such as that though he was secular he became Islamist just before Independence. That he did not believe in secularism and that Quran and Sunnah were to be the constitution of Pakistan. “While emphasising in my speech in the Ahmadiyya Peace Conference I reiterated that Pakistan can only survive by reverting back to Quaid’s vision of a liberal, secular progressive democracy. I explained that there was no contradiction in Quaid’s vision nor was there any conflict with Islam. He believed in democracy as an Islamic concept when he claimed that democracy is in the blood of Muslims since the advent of Islam. “Quaid believed Prophet Muhammad (Peace Be Upon Him) was given the title of Rehmatul Lil Alameen, irrespective of caste, creed, colour or gender—an essentially secular concept. That’s why he separated religion from state management and declared categorically that Pakistan would not be a theocratic state. “I regretted in my speech that, however, after his death his dream of a Pakistan as a modern, democratic, liberal and secular state was waylaid by the power troika comprising of military, civil and judicial bureaucracy backed by the feudal and vested interests. And Quaid’s vision of an Islamic social welfare state got converted to what we have today — a country where life has become short, brutish and nasty at the hands of those whose forefathers hated Quaid and Allama Iqbal, where Muslims have been killing Muslims with impunity. “And finally about the declaration of Ahmadis as non-Muslims by the Parliament under Shaheed Zulfikar Ali Bhutto, who I maintain shall remain my great leader until my end, I said what I said was in the above historical context. Personally I believe that any conglomerate of people (assembly or parliament), its members following different sects or fiqas, cannot override the divine right of the Creator to decide about the real intent and purpose of His created beings. And I leave it at that with no ill will or disrespect to the “Muslims in Pakistan and everywhere in the world”. If I hurt any one’s feelings, I again offer my thousand apologies in the real spirit of Islam seeking forgiveness from all and as per the command of Holy Prophet Muhammad (Peace Be Upon Him), the last of the Prophets,” he stated.