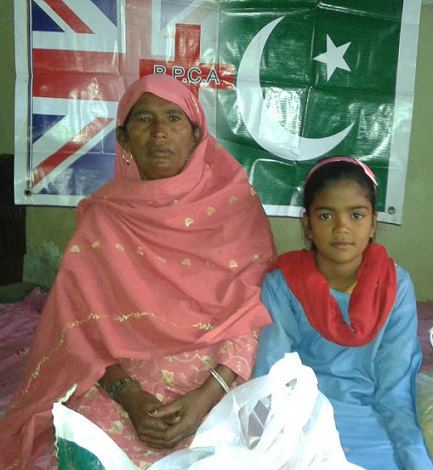 Faisalabad: November 16, 2015. (PCP) untouchable status of Christians in Pakistan became very apparent in recent days when an 8 year old girl, Sara Bibi, was scolded, beaten and locked in school washrooms allegedly by her head teacher in a fit of rage that a 'kaffir' (infidel) Christian dared to use the same toilet as Muslims. Sara Bibi, the youngest of five siblings, has now been excluded from Government Girls Primary School in Samundari near Faisalabad, Punjab, where she was a year 3 pupil. Reports suggest the innocent girl was accused by other classmates who had been offended by the actions of a 'choora' Christian who had polluted their toilets, highlighting how the hatred towards Christians is cemented into young minds at a very nascent phase. This pariah status of Christians is prevalent in Pakistan. Headmistress of the school, Zahida Rana has been accused of locking Sara in the bathroom, the principal then shouted aggressively at her: “You are a Christian, an infidel. How dare you use the same toilet as Muslim girls? Despite vigorously pleading her innocence Sara was beaten and only released from the washroom 3 hours later at the end of the school day, much to the chagrin of her family. Local Christians have strongly condemned principal’s 'inhuman behaviour' After Senator Sherry Rehman highlighted the incident during a session in the Senate of Pakistan, Chairman of the Senate of Pakistan, Senator Raza Rabbani ordered an inquiry into the attack but few humanitarians in Pakistan believe much will come of the enquiry, as previous similar responses have had little affect. Leader of the House Raja Muhammad Zafarul told the House that he had received an initial report regarding the incident. He said that the report failed to satisfy him and so he directed the Executive District Officer to meet the Christian girl and her parents himself and then report back to him. A local police official, Muhammad Afzal, said they had not received a complaint but that action would be taken if a grievance were filed. Thus far no corrective action has been taken. As is usual in such situations the family have gone into hiding after several threats that a blasphemy allegation would be laid against them. Our BPCA officers will be meeting with the family and the school on Monday to see how we can help. In the meanwhile we ask for Christian brothers and sisters to pray for the family. The family require financial support to help with their current relocations whilst in hiding, due to them receiving several threats. Until it is known how the government and the school will respond to the attack we will not help the family initiate a legal challenge for justice, however we call for Christian prayers into this situation. Wilson Chowdhry, Chairman of the British Pakistani Christian Association, said: "We are often asked why Christians are so illiterate with only 7% attaining an adequate level of literacy. Where here you have a prime example of the bullying, harassment and violence young Christians face daily. This hatred is top down and throughout educational establishments and leaves Christians demoralised and subjugated. This alarming situation is exacerbated with a figure of 700 Christian girls abducted, raped and forced into Islamic marriage per year, the majority of whom are kidnapped after school after joining Muslim girls on a trip out. The national curriculum fuels the hatred towards minorities, by caricaturing and demonising minorities. Under such hostility what chance is there for minorities to educate their next generation?"