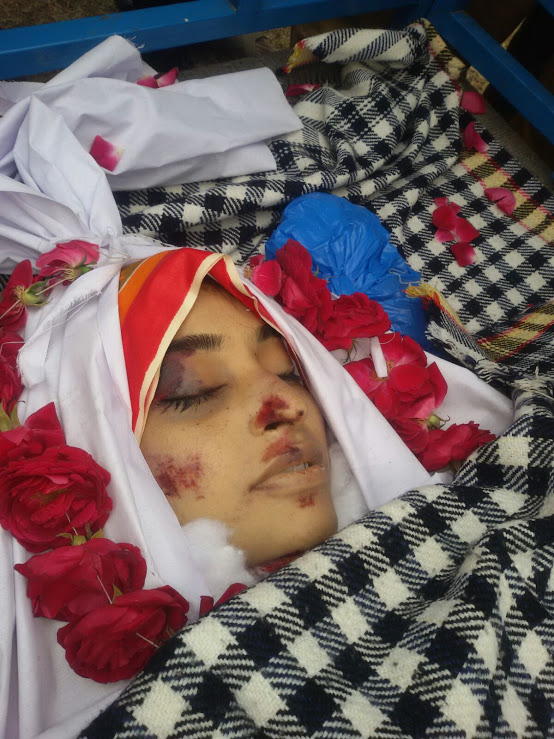 Lahore: January 22, 2016. (PCP) A Christian girl has been killed after she and two friends shrugged of the advances of some young drunken Muslim men from one of the elite areas of Lahore, Defence Colony. Kiran (17 years), Shamroza (18 years) and Sumble (20 years) three Christian girls were simply walking home through Defence Colony after a hard day's work as beauticians, on their way to their deprived Christian community in Baowala. They had set off at 9pm on 13th January, with intention to get home quickly before it got too unsafe so they could get some rest before returning to work the following morning. On this fateful night however they were accosted by four allegedly drunk Muslim in a maroon car, who started to misbehave with them. The intoxicated men shouted suggestive and lewd comments at them and were harassing them to get into the car with them for 'a ride and some fun'. The three girls explained that they were devout Christians and did not practice sex outside of marriage and bravely scolded the young men for their untoward advances. This caused an immediate change in the demeanour of the boys who became more aggressive and started to threaten the girls to enter the car or to be physically forced in. Terrified of the increasingly dangerous situation they were in the girls started to run in a fit of panic. This only enraged the young Muslim men further, one of them shouted out at the girls, he said: "How dare you run away from us, Christian girls are only meant for one thing the pleasure of Muslim men." The inebriated men drove aggressively after the girls and crashed their car into them. The impact on Shamroza and Sumble threw them to the sides of the vehicles and sharply to the ground. The result of crashing into the hard street surface caused Shamroza to break several ribs and Sumble broke her hip. Kiran was even more unfortunate as the impact of the car lifted her off the ground and on to the bonnet of the car, where she thumped the windscreen. The young men continued to laugh in their drunken stupour and increased their speed, finally braking when they could see another car before them. The momentum of the emergency stop threw Kiran up into the air and rapidly onto the floor where she cracked her head open and smashed numerous bones, the resulting internal bleeding killed her within minutes. The families of the three girls have demanded justice but despite the cruelty of this brutal attack and the death of an innocent young girl, unscrupulous police forced them to pay a bribe in order to have a First Incident Report (FIR), registered. The family are calling for a murder enquiry but because of the wealthy status of the young men, little hope exists that justice will prevail. Police are said to be doing little to apprehend the young men and are allegedly delaying the investigative process. Often in such cases evidence goes missing and witnesses are either threatened or bought out by the families of wealthy criminals in a country where corruption is rife and lauded. Today our officer Naveed Aziz visited the surviving girls, Shamroza and Sumble and offered them our help. We brought the two girls some shawls, a gift in Asian culture which symbolizes protection and covering for girls. We wanted the girls to know that they have brothers and sisters across the globe who are willing to stand for them. We also presented flowers to all three families and two months' groceries to help them through their time of mourning when work becomes a secondary issue. Naveed Aziz said: "All three families are really shook-up, Shamroza and Sumble are grateful to God for saving them but have been inconsolable at the loss of a close friend. Other girls in the local area are now too scared to travel at night and are being accompanied by the men in their families. The community wants justice for poor Kiran and seeks an end to the targeting of young Christian girls." Wilson Chowdhry, Chairman of the BPCA, said: "This act of violence should be met with the strong arm of the law. In any other nation the perpetrators would be arrested, convicted for murder and sentenced for a long term. In Pakistan however the poor go to prison and the wealthy commit whatever crime they wish with impunity. Violence against Christians is rarely investigated and highly unlikely to be met with justice. The usual pattern in these cases is for Christians to pay a bribe to encourage police to complete their duty of registering an investigation, and for the criminals to pay further bribes for the police to spoil the investigation." He added: "Women have a low status in Pakistan, but none more so than Christian women who fidn themselves under the grip or terror, especially after this attack. Muslim NGO 'Movement of Solidarity and Peace' state that around 700 Christian women in Pakistan are abducted, raped and forced into Islamic marriage every year - that figure is almost two a day and the world does nothing. Evidence exists that some rogue imams declare that such acts of conversion through violence are rewarded in heaven, what a terrifying thought."