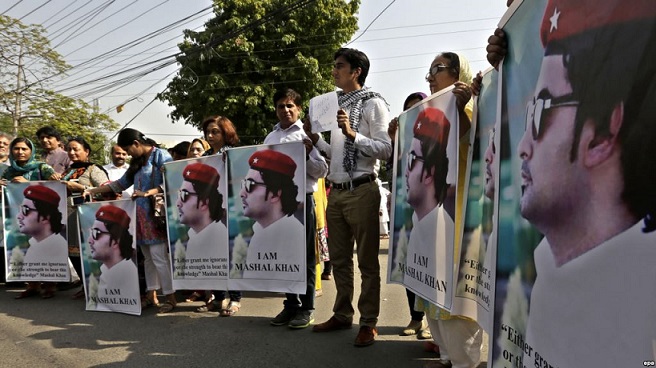 WASHINGTON, DC: January 4, 2018. The U.S. State Department has singled out Pakistan, Iran, and three Central Asian countries for policies violating religious freedom. In a statement on January 4, the State Department said Iran, Tajikistan, Turkmenistan, and Uzbekistan were among a group of 10 nations redesignated as "countries of particular concern" (CPC) for having engaged in or tolerated violations of religious freedom. Also on the list of 10 countries were Burma, China, Eritrea, North Korea, Sudan, and Saudi Arabia. The same 10 were designated as CPCs a year earlier. The statement also said Pakistan had been placed on a special watch list for "severe violations of religious freedom." U.S. relations with Pakistan have been particularly strained in recent days. In a separate matter, the administration of President Donald Trump has said it will soon take "specific actions" against Islamabad for what it calls a lack of cooperation in the fight against terrorism. The State Department did not break down alleged violations of religious freedoms for each country on the lists. The designations were made on December 22, it said. The U.S. secretary of state annually designates governments it determines to have engaged in or tolerated systematic, ongoing, and "egregious" violations of religious freedom as CPCs. "In far too many places around the globe, people continue to be persecuted, unjustly prosecuted, or imprisoned for exercising their right to freedom of religion or belief," the statement said. "Today, a number of governments infringe upon individuals' ability to adopt, change, or renounce their religion or belief, worship in accordance with their religion or beliefs, or be free from coercion to practice a particular religion or belief." "These designations are aimed at improving the respect for religious freedom in these countries," the statement said, while adding that it welcomed moves by "several designated countries" to improve their respect for religious freedom. The designations are part of the International Religious Freedom Act (IRFA), pass in 1998. It requires an annual report on religious freedom to be provided to the U.S. Congress and for a list of countries of particular concern to be designated each year.