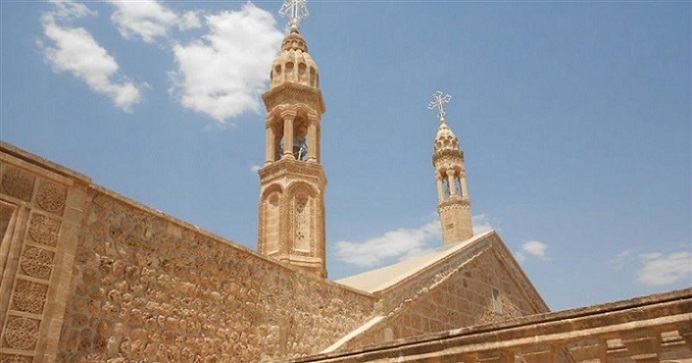 Turkey: June 2, 2018. Syriac Orthodox Christians have welcomed the Turkish government’s return of 55 title deeds, representing nearly half of their ancient church properties in southeast Turkey, which had been confiscated by the state in recent years. Fifty of the official property deeds were delivered to the Syriacs’ 4th century Mor Gabriel Monastery near Midyat, in Mardin province, on 22 May. The disputed documents were received in person by Archbishop Timotheos Samuel Aktaþ, Syriac Orthodox Metropolitan of Tur Abdin, and Kuryakos Ergün, chairman of the Mor Gabriel Foundation. An additional five title deeds were returned to another Syriac Christian foundation in Mardin. The turnover of Syriac community deeds resulted from the 27 March passage of an omnibus bill in the Turkish Parliament. The newly amended measures signed into law by Turkish President Recep Tayyip Erdoðan authorised the return of these historic Syriac properties, many predating Ottoman times, to their original owners. “These returned deeds have created great joy here among the Syriac Christians in Mardin and those who live abroad.” “This is the first time our property deeds have been returned,” Ergün told Cumhuriyet newspaper on 27 May, noting that the new judicial amendments had considerably reduced property ownership problems of southeast Turkey’s Syriac community. “These returned deeds have created great joy here among the Syriac Christians in Mardin and those who live abroad,” the foundation chairman told the daily. “At the same time, this also means the return of our minority rights, as birthed in the Lausanne Treaty,” Ergün stressed. But although he declared the legal change was “of great significance to us”, he also clarified to Doðan news agency: “We still have a legal dispute over ownership of lands belonging to the community.” The recovery of various Syriac monasteries, village churches, and cemeteries, along with some 70 vineyards, gardens and lands attached to them, is still pending in the local courts. A year of negotiations The formal transfer followed slow-paced months of legal negotiations since June 2017, after the Syriac community in Mardin first confirmed that without their knowledge, legal ownership of at least 110 of their church properties had been revoked and turned over to government entities since 2014. When the Syriac community openly opposed the wide-scale expropriation, the Mardin governorate backtracked in July 2017, establishing a commission to resolve the dispute and stating that a legal amendment would be necessary for an “exact solution” to the controversy. Inexplicably, many of the Syriac Christian deeds turned over to the state Treasury had then been transferred under the control of the Religious Affairs Directorate, a public institution which oversees only the affairs of Turkey’s Muslim institutions. News of the church property seizures was initially dismissed by some government officials, including the head of the Religious Affairs Directorate, who denounced the reports as a lie and “dark propaganda” being circulated abroad to defame Turkey. But eventually the extensive expropriations were acknowledged in November 2017 by Deputy Prime Minister Hakan Çavuþoðlu, who declared the transfers were “mistakenly” enacted and pledged that the church’s property rights would be returned. By early February, Turkish media outlets reported that amendments designed to resolve the Syriac property issues were being added to a planned new omnibus bill in Parliament. After reviewing the proposed text, lawyer Rudi Sümer for the Mor Gabriel Foundation commented to the daily Hürriyet newspaper that the church’s property issues would “partly be solved” in the proposed amendments. “The 30 properties that should be returned include the Mor Malke, Mor Ya’qub and Mor Dimet monasteries,” Sümer said at the time. “These three are very important.” On 8 February, the European Parliament had referred specifically to the Syriac property seizures in a resolution on Turkey’s human rights situation, “condemning the confiscation of 50 Aramean [Syriac] churches, monasteries and cemeteries in Mardin” and calling on the European Commission to “urgently address these issues with the Turkish authorities”. Land boundaries redrawn The controversial transfer of ownership had actually begun back in 2008, when regional authorities incorporated Mardin into a metropolitan municipality, updating the land registry and in the process redrawing boundaries of the historic Mor Gabriel Monastery. The legal changes in effect slashed large parcels of land from the monastery’s property, authorising local officials to redistribute the land and other church assets in the surrounding villages as the property of “institutions whose legal entity had expired”. “Before 2000, there were no rights for declaring foundation ownership of unmovable properties. So previously our churches, monasteries and graveyards were registered in the names of an individual villager,” Ergün explained to Cumhuriyet newspaper. The Tur Abdin (literally ‘Mountains of the Worshippers’) region in Mardin is the ancient homeland of Syriac Christians, who still speak an Aramaic dialect close to that of Jesus and date their monasteries and churches back through the past 17 centuries. Less than 3,000 Syriac Christian citizens of Turkey still live in the region, although an estimated 20,000 now reside in Istanbul. Tens of thousands have immigrated to Europe during the last few decades of armed fighting between Kurdish separatists and Turkish military forces in the southeast. The post Turkey returns confiscated Syriac church property deeds appeared first on World Watch Monitor.