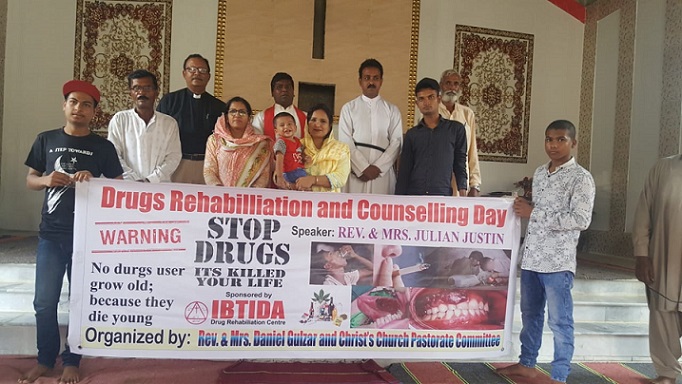 Karachi: September 26, 2018. (PCP) Rev. Daniel Gulzar, Mrs. Nazleen Daniel and Christ Church Pastor Committee organized Drugs Rehabilitation and Counseling Day sponsored by BTIDA Drug Rehabilitation Centre in different venues i.e. Essa Nagri East, Pahar Ganj Central, Lyari Slaughter House District South, Bhains Colony Malir, Lalabad Court of Drugs. Speakers Rev. and Mrs. Julian Justin, Rev. Daniel Gulzar, Mrs. Nazleen Daniel and others said that as per research the initial decision to take drugs is typically voluntary. But with continued use, a person's ability to exert self-control can become seriously impaired; this impairment in self-control is the hallmark of addiction. They further added that the home environment, especially during childhood, is a very important factor. Parents or older family members who use drugs or misuse alcohol, or who break the law, can increase children's risk of future drug problems. Although taking drugs at any age can lead to addiction, research shows that the earlier a person begins to use drugs, the more likely he or she is to develop serious problems. They said youngsters are the most affected by drugs and alcohol. Every individual whether in a town, city, community, family, school or college is affected by drugs and alcohol, directly or indirectly. As per newspaper report, twenty-three million people, mostly above 12 years, are drug addicts who are affecting more people around them; for example, their parents, neighbors, siblings and friends etc. They further added that the hazard of drugs can be battled through education and everyone should be educated about the harm and effects of drugs so that they may know the consequences of its use and can avoid it. They demanded from the government to take strict steps against the drug dealers.