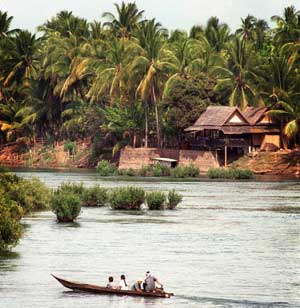 VIENTIANE, LAOS: (BosNewsLife) Seven Christian men who were detained by security forces in southern Laos for holding an "illegal" church service are free, a day after BosNewsLife news agency published about their plight.

A government official in the Phin district of the southern province of Savannakhet confirmed to Radio Free Asia (RFA) that they were all released Wednesday, January 2. "Yes, they were arrested, but today they've all gone home," the official was quoted as saying by RFA, a U.S. funded broadcaster which closely follows the region.

The official, who spoke on condition of anonymity, declined to discuss details of the arrests or comment further on the case. Activists said the group included three church leaders identified as Akeo, Kert, and Somwang, while the other Christian men were named Boulai, Champee, Agàe, and Ayoung.

It was not immediately apparent if authorities had dropped the charges or whether they would still face trial.

The raid was the latest in a series of incidents faced by minority Christians in the Communist-run Asian nation. Though Christian services are allowed in some parts of Laos under strict government control, Christians living in remote areas of the country are frequently facing harassment or expulsion from their homes by local officials.

In November, authorities detained four Lao Christians for a week in the Keovilai village in Savannakhet province's Vilabouly district on charges of

They were allegedly forced to stop their church meetings as local authorities did not want to have devoted Christians in the village.

"Appeals to higher levels of authority in the central government prompted district and village officials eventually to free the detainees, but only after community members were questioned and one elderly woman named Bounlam fell ill and was sent to a hospital," RFA quoted a Christian leader as saying. He was apparently speaking on condition of anonymity amid security concerns.

Activists and local Christians have linked the persecution of Christians to concerns within the Communist party and movement Pathet Lao, which has ruled the Southeast Asian nation since 1975, ending a six-century-old monarchy and instituting a strict regime aligned with Vietnam.

Communists view the spread of Christianity as a threat to their power base and its atheistic way of thinking, BosNewsLife established.

While Christian activists say the country's constitution guarantees the right to freedom of worship, authorities have reportedly called the

Christian faith a dangerous "foreign religion" that should disappear from the nation's many villages.

In a 2017 report, the U.S. State Department complained that local Lao authorities in the mostly Buddhist country often arrested or detained members of minority religions during the year, with a district-level official in Houaphan province expelling 26 Hmong Christians from their village, advising them, they could return if they renounced their faith in Christ.

HRWLRF told BosNewsLife that it had called on the Lao government to respect the rights to religious freedom of Lao citizens as guaranteed by U.N. conventions and the country's constitution. Christians comprise less than two percent of Laos' predominantly Buddhist population of about 7 million. Many Christians worship in three main churches – the Lao Evangelical Church, Seventh-day Adventist Church, and the Roman Catholic Church, but non-registered house churches are spreading across the nation.