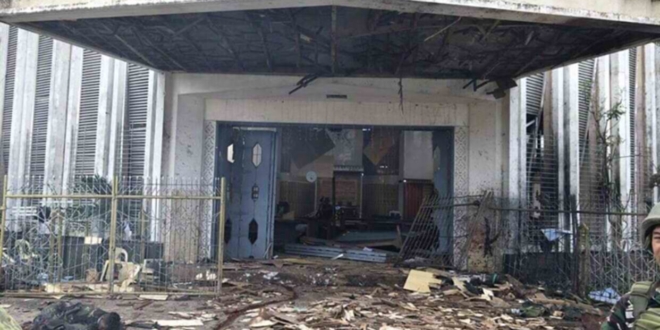 Hours after the attack Islamic State (IS) confirmed they were responsible for the attack on Jolo Island a place known for activity from several jihadists groups.

One suicide bomber initiated the first blast at 08:45 local time (00:45 GMT) within the cathedral as Sunday Mass was underway, while soldiers responded a second blast was exploded just outside the church entrance some minutes later.

A statement from IS said the attack was carried out by "two knights of martyrdom" against a "crusader temple".

Jolo for a long time has been a base for Islamist militants, including around 400 members of the Abu Sayyaf group one of the smallest but most violent jihadist groups in the Philippines, who have been involved in several terrorists’ attacks and hostage taking incidents. The Leader of Abu Sayyaf has been declared the leader of the IS group in Philippines. Many different Islamist factions have declared allegiance to IS.

Shockingly the attack occured only days after a majority-Muslim area in the region voted for greater autonomy in a referendum. Voters in majority-Muslim areas of Southern Philippines approved the creation of the Bangsamoro Autonomous Region. However in stark contrast voters in Sulu province, where Jolo is located, rejected it.

"It is alarming that young Muslim's across the globe are still being taught that every Christian is a crusader and that adult Muslims who are so far removed from the crusades - generations later, feel it is right to declare all modern-day Christians as responsible for the atrocities that occurred hundreds of years ago.

"The alarming accounts negate the fact that the Christian crusades were in fact a retaliation for Muslim incursion and that atrocities were undertaken by both sides.

"Whereas Christians in modern society have moved on, for all intents and purposes it seems as if the many global Muslims have not and maintain a very myopic view.

"Christians in Pakistan are labelled as spies of the west and crusaders in Pakistani text books and I cannot help but think that any secession of areas in the Philippines or self-governance in majority-Muslim areas in the region, will only exacerbate the existing hate through a similar skewed national curriculum that would be introduced by any new regime.

"The situation in Philippines regarding a growing separatist movement is one all western nations should take note of. Already in Britain I have heard similar calls at a debate I once took part in at SOAS University in the early days of the BPCA, at the time I was oblivious to this particular desire which is espoused by a larger than expected spectrum of Muslims in the UK.

"In Australia a brave Imam has come forward and openly spoken about the 'mess' in his community that has led to plots to introduce a separate Muslim state funded by tax-payers .

"The continued ignorance of western governments who bury their heads in the sand to this growing ideology which also includes a desire for Sharia law, either of which would create a two tier society and polarize our communities, as well as undermine the modern day freedoms we exercise and champion.

"I pray the the Philippines Government is given the global support it needs to root out the extremists involved in the recent attack.

"A concerted global effort must manifest which alters the trajectory of hate that is consuming our world."