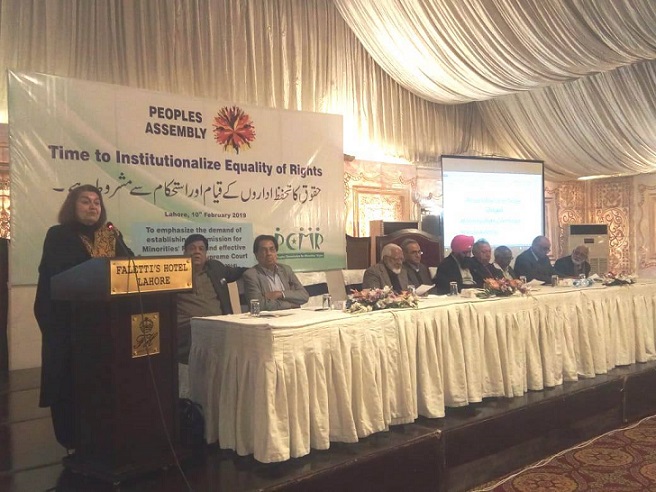 The People Assembly of about 300 participants drawing representation from across the country and cross sections, discussed the draft bill thoroughly and passed in unanimously. The bill provides for an autonomous, independent and permanent National Commission for Minorities’ Rights. The copy of the draft bill was entrusted to the Provincial Minister for Human Rights for initiating in the parliament.

Speaking on the occasion, I.A. Rehman, PCMR’s Patron-in-Chief underlined the fact that establishing a National Commission for Minorities’ Rights was a task long overdue. The Liaquat-Nehro Pact signed in 1950 and Action Plan for Human Rights of 2016, the Supreme Court judgment issued on 19 June 2014 (SMC No. 1 of 2014), all required this commission to be constituted therefore we urge the government to introduce the law without any further delay.

Peter Jacob, PCMR’s Chairperson reminded that the political parties had promised establishing said commission in their election manifestos 2018, therefore they should support legislation in the parliament. The proposed commission must have a broad mandate to monitor, evaluate the quality of implementation of laws and policies, protect and promote the rights of minorities as well as contribute making new laws and policy.

M. Parkash Mahtani advocate, cited the example of Sindh Commission for Minorities rights which was enacted upon in 2016, though the rules of business are yet to be framed and the Commission is yet to be formed. He emphasized that delays in implementing the laws fails the very purpose that these were made for.

Saroop Ijaz advocate stated that, the proposed commission must be constituted in accordance with UN Paris principles that emphasize autonomy from political influence, financial independence and legal cover, appointment of competent members, broad mandate based on universal human rights norms and standards.

Kalpana Devi advocate stated, the members of the proposed commission should be appointed on merit and the membership should reflect pluralism by extending it to persons representing different religious minority and majority communities in order to make it an empowered and operational body.

Bishop Alexander John Malik stated that it is time that economic, social and cultural of marginalization of minorities in Pakistan is addressed. The government and civil society must work together to ensure equal and equitable rights guaranteed in the constitution of Pakistan.

Wajahat Masood, Chairperson of Centre for Social Justice stated that the direct and indirect discrimination perpetuate marginalization hence institutionalizing the equality of rights, is imperative and removing the existing barriers to enjoyment of rights an urgency.

Justice Nasira Javed Iqbal said that the public private partnership should help foster closer relationship beyond all distinctions therefore discrimination in the name of religion has to be removed.

Justice Dr. Khalid Masud said that the government should address disparity of rights and opportunities, and must introduce effective affirmative measures for empowerment of minorities which will strengthen democracy; diversity and foster interfaith relations in Pakistan.

Dr. Kalyan Singh stated, the government must implement Jillani judgment in letter and spirit for strengthening respect of human rights and rule of law in Pakistan.

Minister Ijaz Alam Augustine said that PTI is firmly committed to actualizing the vision of the Jinnah, with regard to protection of religious minorities and make sincere efforts to implement the orders passed by Justice Tassaduq Hussain Jillani in 2014.