Are there equal rights for the Minorities of Pakistan? 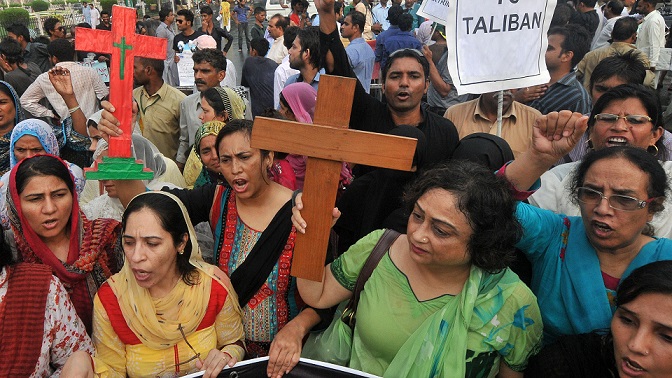 Islamabad: February 19, 2019. (PCP) From several years, minorities in Pakistan have been agitating for the equal rights, freedom of speech, freedom of faith, social justice and offer their religious obligations. The government’s promises/claims are always there but on ground reality is that minorities have been deprived of their rights. Christians, Hindus, and Ahmadis are being targeted in the name of Islam, worship places are either demolished or burnt, forced conversion and blasphemy laws are being used for the vested interests.

The 6 home-based churches in Abbottabad, the city where Al Qaeda’s chief Osama Bin Laden was found and killed in a raid by U.S Navy Seal commandos in 2011, were forcefully closed over alleged security threats. The surprise ban was imposed in the last month of year 2107, which came shortly after when U.S. placed Pakistan’s name on a special watch list for severe violation of religious freedom.

Documents available with our organization, said Farrukh Saif , “clearly stated  that the district government in Khyber Pakhtunkhwa province (KPK) closed the churches due to security alert while the district police officer (DPO) claimed that only non-registered churches were closed. Later on, the local government re opened the churches for the time being but still they are not allowed to perform their religious services after 14 months.”

Pastor Christopher Shakir, who runs a local church in Abbottabad, said that the churches got verbal permission for Christmas services in 2017 but later the government-imposed restriction to offer worship and services. My father started this church in early 90s and there was no restriction but since Pakistan Tehreek Insaf (PTI) came into power, it imposed restrictions on freedom of religion, he added.

A minority rights activist, requesting anonymity, said that there are mosques in almost every street of the country. ‘‘Can the federal or provincial govt dare to close a single mosque on the pretext of registration or security threats?’’ he questioned, adding that there are double standards when it comes to application of law in the Muslim-majority country.

It is just to remind that during the last tenure, the PTI government in KPK approved a plan to provide a monthly stipend of Rs.10000/ of Muslim prayer leader in a scheme that will cost 3 billion a year.