Pakistani Christian woman beaten and forced to convert to Islam 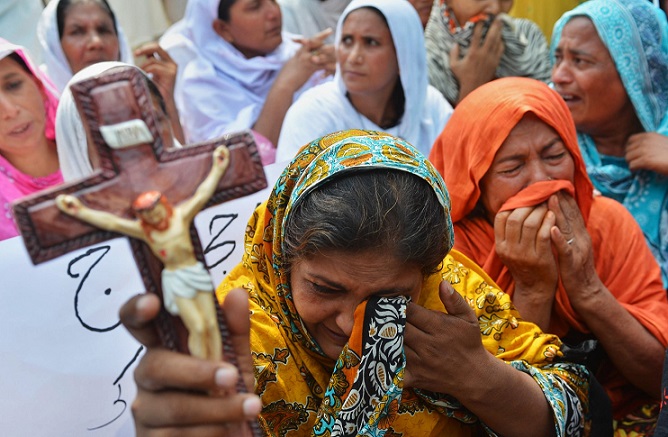 London: February 19, 2019. (PCP) A Pakistani Christian mother of eight, Shazia Bibi, was beaten and forced to convert to Islam. Shazia Bibi used to work as a domestic servant at Mian Imran’s house, in Chanan Village District Gujrat, where she lived with four of her children.

After a few months Mian Imran, who has links with extremist groups, started pushing Bibi to convert to Islam.

He offered her Rs 200,000 to convert as well as a home. But she declined his offer, not knowing how dangerous it would be for her.

Imran kept trying to convince her to convert to Islam and when he realised Bibi was not going to change her religion, he started claiming that she owed him Rs 200,000 saying that if she wanted to leave, she would have to pay him.

Bibi shared the whole matter with her husband, Bashir, who took her and the children away without Mian Imran‘s knowledge. But when Mian came to know, he went to their house and abused and beat them before forcefully taking their kids with him.

He threatened that if they do not return the Rs 200,000 he would kill them and convert all their children to Islam.

He further told the family that going to the police would not make any difference because of how powerful he is.

Our partners, who were involved in the case told us that when they approached Mian Imran he didn’t allow them to see Shaiza Bibi who with her children had moved to a Madrassah run by the extremist group.

They were told that Bibi and her children had converted to Islam therefore she could not be allowed to live with her Christian family. After several meeting Mian Imran agreed to release her on two conditions – that she will not change her religion and she will be allowed to practice Islam, and she has to pay him the money owed.

There was no other way and keeping in view the family safety, Rs. 200,000 was paid to Mian Imran for the release of Shazia Bibi.