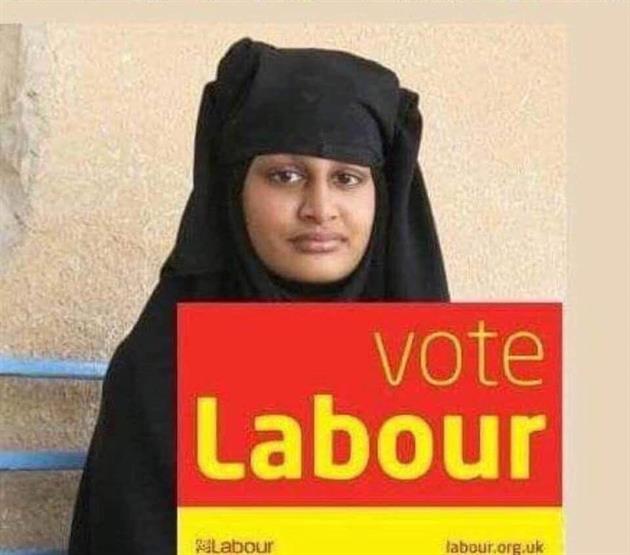 London: March 5, 2019. (PCP) Security and intelligence professionals are questioning the good sense of allowing Islamic State defectors who ran away to marry jihadis and establish a Caliphate, and the UK Home Office is finally following suit.

“As we approach this admittedly extremely complex and difficult problem, public safety is the first thing that we will consider.

“It follows from that that anyone who has put themselves in this situation can expect to be questioned and investigated and potentially prosecuted if they return to our jurisdiction.”

Home Secretary Sajid Javid said ISIS proponents who left the UK for jihad were ‘full of hate for our country,’ and should be prepared to be prosecuted if they do return home. He said:

"My message is clear – if you have supported terrorist organisations abroad I will not hesitate to prevent your return."

Wilson Chowdry said: "It is heartening to see the Home Office take a stand against IS atrocities and hold other individuals accountable for their treacherous if not treasonous actions.

"There have been arguments made that Shamina Begum will be left stateless by the actions of Home secretary Sajid Javid by revoking her citizenship; however, when you hear Ms Begum speak she herself identifies IS as a state she chose to live under.

"Ms Begum has repudiated her British citizenship, and the Home Office is simply making a formal acknowledgment of that fact."

Jihadi bride, Shamina Begum, who left with her classmates to join the Islamic State (IS) 4 years ago, while speaking to the Evening Standard shrugged off the Manchester Bombing as simply retaliation for the bombing against the Islamic State. She is now in the process of having UK her citizenship revoked. According to the Convention relating to the Status of Stateless Persons, article 1 (1):

"A stateless person is someone who is not considered a national of any state under operation of its law."

However it does appear that these women, who now find themselves in less than desirable circumstances, hold allegiance to IS. Many of them claim that they felt compelled under Shariah law and precepts to leave western countries and join the Caliphate to mate with their soldier husbands. It would seem they do not really consider themselves stateless, only inconvenienced.

A Canadian twice-widowed jihadi wife that was interviewed laughed when asked about Yazidi sex slaves noting that slaves are a reality in the IS and said 'I believe in Shariah wherever there is Shariah.'(click here)

Canadian Broadcasting Company reported vicious and continued harassment of Yadizi women now living in Canada by their ISIS rapists, but to jihadi women they are simply the spoils of war.

Many Yazidi women in fact do report that foreign IS brides assist their husbands in abusing them and showed them no mercy.

This heartless confession was just days after it was reported that Yazidi refugees in Canada were receiving threatening and obscene calls by men speaking Arabic and claiming to be their rapists.

BPCA Canada Vice-President Keri-Lynn Gibbs said: "There are those who say these women are harmless, but they are the ones teaching hate to their babes in arms. They are aiding the atrocities that are happening, with full knowledge and consent.

"They knowingly abuse or assent to the right to rape other women, without any shame or remorse. They are complicit in all the actions of the men.”

There are many similar stories in Pakistan of sisters or mothers luring young Christian girls by inviting them on a shopping trip only for them to be raped by male family members, and forced into Islamic marriage.

Furthermore, female activists in Pakistan target women from religious minorities whom they want to force to wear hijab. The horrible experience of two sisters studying at university was written about by Mitch Potter in the Toronto Star in 2014 where the scolding of a female Islamist was followed by a kidnapping and gang rape."

"What is appalling is that young women are often thought to be more mature than young men, and we recognise a woman's cognitive ability is no less than a man's, so how can we abide with benign treatment of their allegiance to IS?

"They have given clear testimony where their loyalties are - they should not be allowed to act as if they were on some sort of trip to another place - they went to participate in acts of war and genocide ."

In a more recent interview the husband of Ms Begum, IS fighter Yago Reidijk who is detained in a Kurdish prisoner of war camp has stated the couple made a mistake in joining IS. Though no attempt was ever made to escape IS Shamina Yago now believes they were somehow duped.

Shamina has been very lucid about the fact that she was not peturbed by the head of an IS victim found in a bin and that she had been compelled to become a jihadi bride because of graphic IS videos online.

Mr Reidijk now states he 'had no direct involvement in hurting or harming anybody' but is now being linked to a gang of seven who planned a terrorist attack at a rock concert in Arnhem, Holland. It is also said that he was injured whilst in combat as an IS soldier so how could it be possible he committed no injuries to others?

Mr Reidijk married Shamina Begum at the tender age of 15 which would have been illegal for him in Holland, yet when questioned on this matter he described how her young age made him think twice, but he was reassured due to her desire to get married to him. The lack of coercement was a deciding factor for him but how far would that have gone - would he in fact have considered the same marriage if she was 13 or 14 or even younger?

The laws in western nations are clearly in contradiction to his personal beliefs and our concern is that with his history of terrorism compounded by his bankrupt moral compass set outside the norms of the west, a return to the Netherlands would be in detriment to the nation.

Though Mr Reidijk has asserted that Ms Begum 'Is not a dnager to anyone whatsoever,' BPCA does not share the belief. By naming her new child Jarrah after an Islamic warlord who was known for his merciless massacre of 'infidels' Ms Begum has only served to further illustrate her hatred for non-Muslims. It would be extremely dangerous to have her return to the UK where her son will no doubt be radicalised in fulfillment of the prophetic naming of himself by his 'mistaken' parents.

Jeremy Corbyn's support for the return of Shamina Begum is in our opinion misplaced (click here). As a nation we must do all we can to prevent terrorists that have spent a long period (in the case of Ms Begum 4 years), fighting and collaborating with IS from ever returning to our shores.

The Labour Party in the UK is increasingly being named as a party of anti-semites and Dame Margaret Hodge a serving Jewish Labour MP gave a scathing interview to the Guardian about the interference by Corbyn's inner circle in complaints regarding this xenophobia (click here). Though repentant of his anti-semitic words in several Facebook posts shared in 2014, illustrated after a meeting with the Board of Deputies for British Jews, MP Naz Shah's positioning as a shadow equalities minister was met with disdain. For many on the outside the rise of antisemitism in the Labour Party equates to a party supported by terrorists. This perception is not reduced one iota by Mr Corbyn's recent support for Ms Begum and it is therefore no surprise that satirical images such as the one below have been shared virulently across social media:

If ever there has ever been a need for cross-party agreement over the safety of our realm it is now. Moreover our politicians have to think about the safety of loyal British citizens on our home soil before the rights of treasonous individuals who have exhibited a clear distaste for our laws, culture and nation. Dangerous war criminals who have adopted citizenship elsewhere even when it was never accepted that the 'IS Caliphate' was ever an autonomous soveriegn entity should have their citizenship revoked in our opinion. They should be tried and punished by the nations they find themselves in i.e Syria as is the case for Ms Begum and Mr Reidijk and declared persona non grata.

Wilson Chowdhry, said: "BPCA supports The Hon. Sajid Javid for his decision and call on the protection of UK soil. We assert that Global governments and international bodies require an immediate re-evaluation of what statelessness means in international law. This is especially important when it comes to terrorists committing human rights abuses and repudiating their allegiance to their homeland.”