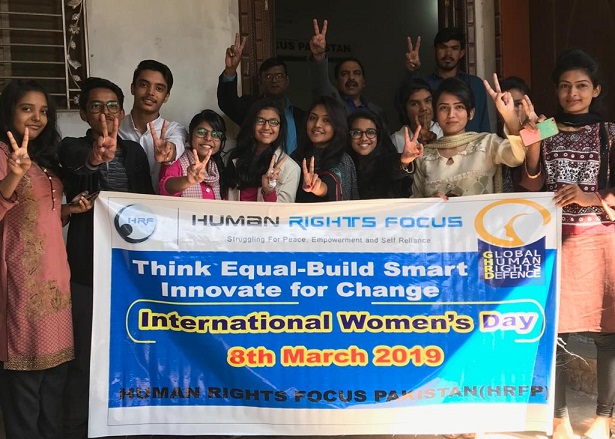 The minority female students urged authorities to end all forms of violations against women particularly the domestic violence, incidents of acid throwing, stove bursting, burnings, honor killings, intimate partners violence, discriminations at higher management postings, trafficking and sexual and mental harassments, should be ended, particularly the abductions, forced conversions and forced marriages of minority girls and the physical, sexual, psychological and emotional violence with women should be eliminated from society. They said further that the violence against women and girls in the public and private spheres including trafficking, sexual and other types of exploitation and to eradicate all harmful practices such as child early and forced marriages and female genital mutilations.

Female students and participants Fareeha Naeem, Areeba Naveed, Minal Riaz, Daim Walter , Laraib Nadeem , Meeram Naveed (Mary),Nawal Riaz, Sheeza Samuel, Carol Waris,  Nida Naeem, Laiba Nadeem, Sonia Iqbal and others shared that how they experienced and observed discriminations being minority. They said further that the minority students even face biased behaviors from teachers and students teasing remarks about Christians, Hindus, Ahmadiyaa, Jews, Sikhs and others during class conversations and sometimes they offered by class fellows and even by teachers for embracing to Islam. The minority students said further that the minority girls are also easy target of sexual harassments, abductions, forced conversions and forced marriages because culprits believe that no may defend them being poor, helpless and oppressed.

Fareeha Naeem and Areeba Naveed shared that how hatred with minority students is observed in 20 marks for those Muslim students also who memorized Quran but the government have no any parallel policy for minority students which keeps them away from getting higher grades required for scholarships, admissions on merit, government schemes (Laptop, women on wheels etc.) access to international institutions, Students exchange programs, subscription in fellowship of international researchers and other state level benefits.

Silvia Rufus joined online and shared input through Skype. She rose that the contents of biased curriculum and forceful studies about “superiority” of Islam, threats, such abuses are making psychological effects on minority students in Pakistan.

Naveed Walter, president Human Rights Focus Pakistan (HRFP) raised that how the minority students face pressure but trying in moving ahead through studies by overcoming these hurdles. He said to achieve the goal of “better the balance-better the world” is only possible if the discriminations of all levels is discouraged and if all stakeholders efforts to make a change in society. He further said today’s  session is a part of HRFP’s efforts for equality and equity in gender and raising that how the minority women face violations twicely; being women and being minority, he added more.

Regarding women’s day a small exercise was also arranged. The female students and other participants were divided into small groups and by their sharing, case studies and presentations the core recommendations were arisen and sent to authorities, decision makers, media with further follow-ups ahead. Their career counseling session was also conducted particularly they were sensitized about available international scholarships and higher studies opportunities. These small groups recommended the remedies through raising voice and for the elimination such discrimination for positive results in society.