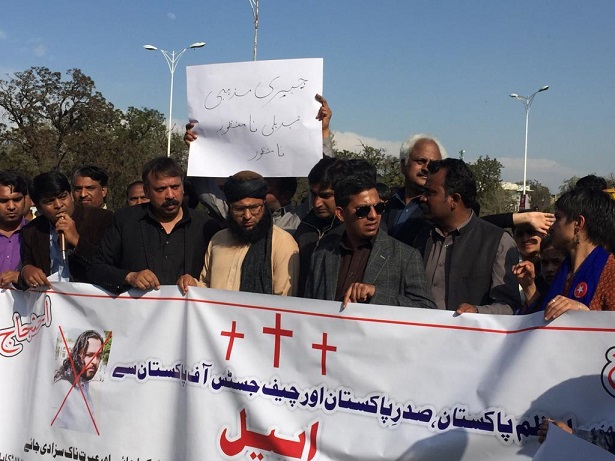 ISLAMABAD, PAKISTAN: March 18, 2019. (PCP) Christians and Muslims held a protest demonstration on Sunday, the 17th of March, outside Islamabad press club to express their outrage over the failure of the Pakistani authorities to deliver justice to Pakistani rape victim, Saima Iqbal, who was abducted last month and was subsequently allegedly tortured, raped and forced to convert to Islam.

Saima Iqbal, 35, was allegedly abducted by Khalid Sati on the evening of the 25th of February when Naveed Iqbal, her husband, had gone to work on night shift in a call centre. On his return, Mr Naveed Iqbal found his wife was missing.

A complaint was lodged in police station “Khanna pul” on the 26th of February. The police did not register First Information Report (FIR) until the 1st of March until Mr Iqbal threatened the police that he would set himself on fire. The police recovered Saima Iqbal from the custody of the accused on the 5th of March. Iqbal, however, learnt from the police that his wife had converted to Islam and had married the accused.

“My wife has been raped and forced to convert to Islam and marry the accused”, Iqbal told Sheraz Khan, Founder and Chief Executive of International Minorities Concern, a UK based advocacy group for minority rights.

Iqbal shared the ordeal of his wife by uploading a video message on social media. A day after the video went viral Iqbal managed to collect his wife from a government-run shelter for women.

In a second video message Saima Iqbal and Naveed Iqbal made a joint appeal to Pakistani Prime Minister Imran Khan to intervene in their case so that they could get justice.

Local Christians and Muslims staged a protest demonstration on Sunday to appeal to Pakistani Prime Minister Imran Khan and the Chief Justice of Pakistan to give justice to Saima Iqbal. Christian and Muslim leaders expressed their dismay at the continuing indifference of the authorities and called for justice for Saima Iqbal.

“I would like you to help me in any way, shape or form. Is it my fault that I am a Christian who loves his wife and who loves me too?  This is impacting negatively on my children. What is their fault? Please help me and my wife in the name of Jesus Christ”, said Iqbal.

Iqbal in his message said: “I have had offers from some people, who said, they could give us shelter. I don’t know what I do. I don’t know who to trust. Saima is still not herself. She doesn’t come across as the person I have known all these years. This is because of the pain, the torture and the suffering she has had to go through”.

"Saima urgently needs psychotherapy. She needs counselling. She is probably suffering from Post-Traumatic Stress Disorder. I do not have resources to get her the psychiatric treatment she needs.”, said Iqbal.

“Imran Khan came to power on the promise that he would turn Pakistan into a country where the poor will get justice, where minorities will get their equal rights.

“Imran Khan during his election campaign cited numerous examples of freedom, equality, justice and fairness in the west and promised the people of Pakistan including its minority citizens that justice and fair play will reign if he is given a chance to rule the country”

Would a western democratic government have taken as long as your government has taken to give justice to Saima Iqbal, Khan asked of the Pakistani Prime Minister.

Khan said: “Sadly, not much has changed from minority citizen’s standpoint. Poor Christian women like Saima Iqbal continue to suffer. Asia Bibi of Pakistan is being held in Pakistan without any moral or legal justification despite her acquittal by Pakistan’s top court.

“When will the Christians and other minorities of Pakistan be given their equal rights”? , he questioned.

“We urge the international community to use its influence on Pakistan so that it takes concrete measures to give protection to the lives and the properties of Christians and the rest of its minority citizens", said Khan