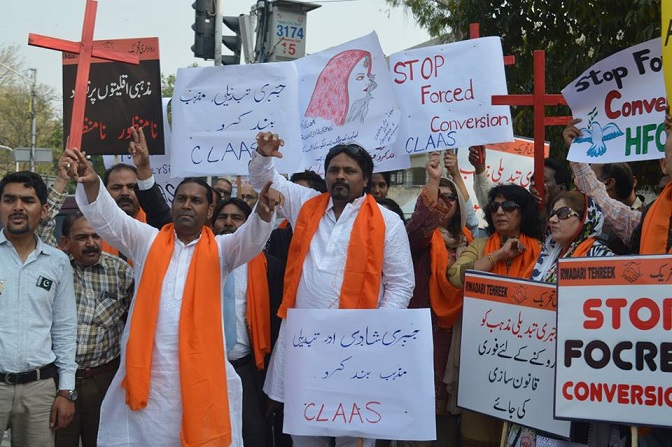 Lahore: March 30, 2019. (PCP) Rwadari Tehreek RT in collaboration with Human Rights Concern Network, Aurat Foundation, Institute for Peace and Secular Studies, Hindu Sudhar Sabha and several other civil society organizations held a Protest Camp on March 30, 2019 in front of Punjab Assembly to condemn the frequent incidents of kidnapping, forced conversions and forced marriages of  women and girls belonging to Hindu, Christian and other minority communities and demanded to enact law to stop forced conversions and to apprehend the elements involved in the forced conversions.

The participants belonging to different faiths, religions and walks of life gathered at the Protest Camp and chanted slogans against those involved in organized business of forced conversions such as Mian Mithu, the Peer of Barchundi Sharif at District Ghotki and Pir Ayub Jan Sarhandi of Sarhandi Shrine at district Umerkot- Sindh and demanded their immediate arrest.

Addressing the Protestors Mr. Samson Salamat, Chairman Rwadari Tehreek strongly condemned the forced conversions and the underage marriages of Hindu and Christian Girls and expressed solidarity with their families who are wandering here and there for justice.

Mr. Samson Salamat demanded that “effective and comprehensive legislation should be passed immediately to curb forced conversion and underage marriages. Furthermore rogue elements involved in forced conversions in Sindh should be apprehended and justice should be done”.

Saeeda Diep, renowned human rights activist and Chairperson of Institute for Peace and Studies said that “conversions to Islam in suspicious conditions is a matter of grave concern and is rightfully sparking fear and anger among the minority communities who are already victim of religious discrimination and persecution through many other ways. Forcibly converting anyone is a criminal offence and therefore those involved in the forced conversion should no more be free and should be put behind the bars”.

Ms. Kathrine Sapna Karamat, Director CTS expressed solidarity with the parents whose daughters were kidnapped, converted and forcibly married. She said that “a lot of people in Pakistan unfortunately do not consider forced conversion as a human rights violation and as a result the incidents of forced conversions are increasing day by day which has added to the sufferings of religions minority communities. But now enough is enough and this should be stopped”.

Mr. Sajid Christopher, the President of Human Friends Organization urged the government to turn its attention towards the woes and cries of the parents whose daughters were kidnapped and forcibly converted, otherwise the chain of protests may spread all over the country. Mr. Sajid Christopher added that “We will not be silent anymore and widen our struggle until we are being heard and therefore we call upon the attention of Imran Khan’s Government on this burning issue”.