NCID Demand Release of the Innocent Victims of Youhanabad 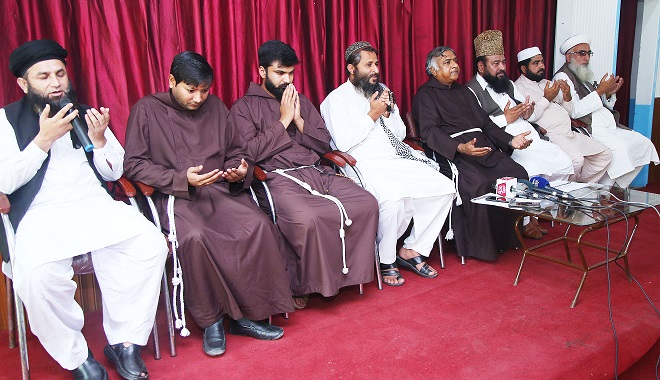 Lahore: April 14, 2019. (PCP) National Council for Interfaith Dialogue Pakistan and Kul-Maslik-Ullema Board held joint a press conference to condemn the imprisonment of the innocent Christians of Youhanabad. These Christians have been in prison after the attacks on two churches in Youhanabad on March 15, 2015. The press conference was jointly chaired by Fr. Francis Nadeem OFM Cap and Maulana Muhammad Asim Makhdoom the Chairman of Kul-Maslik-Ullma Board Lahore.  Mufti Ashiq Hussain, Qari Shahkeel-ul-Rahman, Allama Bader Munir, Fr. Sunil Ifran OFM Cap and Fr. Lazarus Aslam OFM Cap were also present in the press conference.

The purpose of this conference was to condemn the brutal killing of innocent people in the Quetta bomb blast and the release of the innocent victims of Youhanabad.  Special prayer was offered for the martyrs and those who got injured in Quetta bomb blast. It was unanimously expressed that few people and few government departments have been spreading religious discrimination in the country. It was demanded that the government must take a serious action to prevent religious discrimination and there is need to promote religious acceptance and tolerance.

Fr. Francis Nadeem OFM Cap expressed his solidarity for the victims of Quetta bomb blast. He said there is need to have justice in the country. He further stated that if the politicians involved in serious crimes can be released then why the innocent Christians of Youhanabad cannot be released. Many Christians of Youhanabad lost their lives and many got injured but no one have come for their rescue. Their families have been suffering since their imprisonment. Those who are in prisons are facing persecutions and their life is danger. He appealed to the Government of Pakistan and the Chief Justice of Pakistan to release these innocent Christians before Easter, so that they may celebrate it with their families.

Qari Shahkeel-ul-Rehman led the prayer for the victims of Quetta and Youhanabad bomb blasts. Fr. Sunil Irfan OFM Cap prayed for peace and harmony in the country.