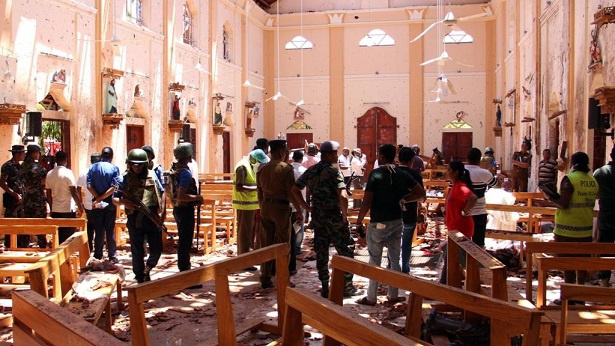 London: April 22, 2019. (PCP) As Easter celebrations were taking place across Sri Lanka in particular within the cities of Colombo and Negombo - where the largest Christian communities exist - a depraved series of bomb attacks on churches and exclusive hotels brought terror to revellers and tourists. Early reports focused on 8 explosions but by the end of the day the final count was 10 in which over 200 people were killed and at least a further 400 injured.

In the early hours of Easter Day (21st April 2019) at approximately 8.30am (3am GMT) while churches were in the midst of celebrations of the resurrection of Jesus Christ, a spate of terrorist attacks across the country ripped through buildings in several locations and a familiar pattern soon emerged. Churches and high-end hotels were being targeted, in what seems to be an extremist agenda against foreigners and the Christian 'others' within Sri Lanka.

Later in the afternoon around 2.15 pm (8.45am GMT), a guest house near Dehiwala Zoo in Dehiwala-Mount Lavinia was attacked and also a private house in Mahawila Gardens,in Dematagoda, while local police officers conducted a house raid.

A number of foreigners have been confirmed killed in the attacks. They are believed to be from the US, China, the UK, Netherlands and Portugal.

The tourism industry is a major source of income towards Sri Lanka's Gross Domestic Product (GDP). The nation has become a popular tourist destination only a decade after an extremely bloody civil war. Last year, it won the title of best place in the world to visit in 2019 by travel guide publisher Lonely Planet.

Sri Lanka's minority Christian community appeared to be the main target of the seemingly coordinated attacks. Christianity is a minority religion in Sri Lanka, accounting for less than 10% of the total population of 21.4 million. Sri Lanka is home to about 1.5 million Christians or about 7% of the population, according to the 2012 census. The vast majority are Roman Catholic. Theravada Buddhism is Sri Lanka's biggest religion, making up about 70.2% of the population, according to the most recent census. It is the religion of the country's Sinhalese majority. It is given primary place in the country's laws and is singled out in the constitution. Hindus and Muslims make up 12.6% and 9.7% of the population respectively. It is estimated that 82% of Sri Lankan Christians are Catholic.

British Pakistani Christian Association, sent their locally based team to the bomb sites and local hospitals to speak with victims of the attack and to offer our assistance. Anton Kyanq BPCA Lead Officer, Prophetess Mary Anusha from Calvary Church, Colombo and two European missionaries Anisha and Brian Longridge travelled to the sites accompanied by Father Chandru of the Anglican Church.

Anton, said: "At each of the sites, there were dead bodies and pieces of flesh strewn all over the place.

"At St Anthony's Shrine identified bodies were wrapped in white bags and the corpses of those unidentified were in black bags.

"We have seen people taken under custody for involvement with the attacks and some of them seem foreign, I think they are Pakistani.

"We visited the site of the operation of the Sri Lankan Special Task Force STF and SWAT teams where they attempted to capture terrorists at a large house, we travelled to several targeted churches and hotels.

"Windows had been shattered, buildings damaged, roofs blown off, all of them had serious fire damage it was a devastating sight to behold.

"Everywhere grieving families were weeping and seeking information of where their loved ones had been taken for hospital care or when bodies would be released from the custody of the armed forces [It is the fashion in Asia to bury dead people the next day]."

Wilson Chowdhry, Chairman of he British Pakistani Christian Association, said: "From 1983 - 2009 Sri Lanka underwent one of the bloodiest civil wars with an estimation of over 100,000 people killed.

"The war between the Sinhalese and the Tamil cultural groups was over the severe discrimination of the Tamil community, but inroads had been made with regards to promoting peace through legal and policy reforms..

"So soon after such a violent history Sri Lanka has today suffered one of the most devastating terrorist attacks on Christians in recent history.

"Though Police have not yet confirmed it we believe that this attack is Islamist-led with the attack following the normal pattern of attacks by IS satellites.

"The targeting of Christians on Easter Day is very intentional and is based on a desire to frighten worshippers from practising their faith and sowing seeds of division amongst communities.

"Moreover, the targeting of high-end hotels which are frequented by westerners is simply a clear hatred for all that is not Islamic a clear indication that fundamentalist ideology is radicalising the Muslims of Sri Lanka, that till now exhibited little interfaith tension.

"Innocent lives have been lost and those killed join a growing list of Christian martyrs in a world where intolerance towards our faith has seen exponential growth.

"World governments and International bodies like the UN must do more to eradicate extremism and terrorism, especially towards Christians who are experiencing unprecedented levels of persecution."