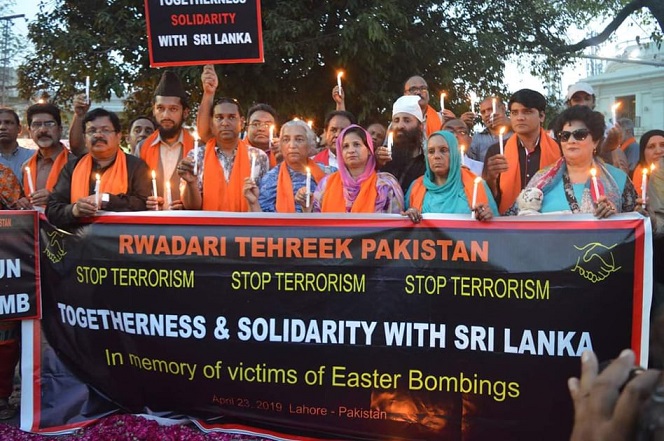 Lahore: April 23, 2019. (PCP) Scores of Pakistanis belonging to different faiths and religions gathered in front of Punjab Assembly in Lahore- Pakistan under the stewardship of Rwadari Tehreek Pakistan (Anti-extremism & Anti-terrorism social movement of citizens of Pakistan) to condemn Easter Day bombings in Sri Lanka and expressed their deepest condolences and solidarity with the victims and their families. The participants of the candle-light vigil chanted slogans against extremism and terrorism and lightened candles and observed silences in memory of all those who lost their lives in deadly attack on 21st April.

Chairman Rwadari Tehreek Mr. Samson Salamat addressed the participants of the Candle-vigil and condemned the bombings in strongest terms and expressed his deepest condolences with the people of Sri Lanka on behalf of the people of Pakistan and members of Rwadari Movement. Mr. Samson Salamat said that “we stand united with our brothers and sisters in Sri Lanka during this difficult time.

“Terrorism has badly hit the whole world but especially South Asian region has been targeted by the extremist terrorist organization which has been the result of religiously extremist and intolerant mindset present in the region in the form of organized terrorist outfits”. Enough is Enough, it is time for South Asia to sit together and formulate a joint plan to deal with the terrorist outfits who are killing people in the name of religion and to make medium term and long term plan to weed out religious intolerance and extremism from the society and to nurture the philosophy of pluralism, interfaith harmony and respect of human rights for a peaceful co-existence”. Mr. Samson Salamat added.

Mr. Samson Salamat further briefed that “Rwadari Tehreek is a peaceful social movement striving to weed out extremism intolerance and terrorism since 2015 after the deadly attack on APS- Peshawar. Rwadari Tehreek is starting its Rwadari Caravan on 24th April 2019 from Karachi which will pass through different provinces and cities by road and will reach Lahore on 27th April, 2019.  When Rwadari Caravan will arrive Lahore on 27th April, a “Humanity March” will be held which will be attended by scores of people from all over Pakistan to say No to Extremism and Terrorism”.