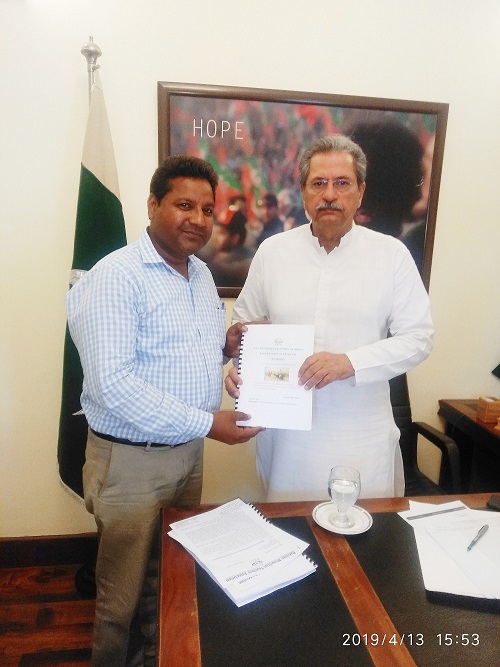 Faisalabad: May 13, 2019. (PCP) Professor Anjum James Paul the Chairman of Pakistan Minorities Teachers’ Association has mailed a letter to Mr. Shafqat Mehmood, Federal Minister for Education, Government of Pakistan on “Need for equality based and inclusive education in Pakistan”. He had a detailed meeting with the honourble federal minister on April 13, 2019 and shared the reservations and recommendations of PMTA to address the discriminatory and biased education system of Pakistani against religious minorities. He also presented five most recent research analysis on the Pakistani textbooks.

Subject:               NEED FOR EQUALITY BASED AND INCLUSIVE EDUCATION IN PAKISTAN

Sir, Pakistan Minorities Teachers’ Association is making efforts for equality based and inclusive education through research and advocacy since 2004 and to make efforts for equal citizenship, equal rights and equal opportunities in Pakistan that Quaid-e-Azam promised in the Constituent Assembly of Pakistan on August 11, 1947 saying, “We are starting in the days when there is no discrimination, no distinction between one community and another, no discrimination between one caste or creed and another. We are starting with this fundamental principle that we are all citizens and equal citizens of one State.”

PMTA appreciates the present government which has a vision to make Pakistan according to the vision of the Quaid-e-Azam through various reforms including education.

1.            Pakistan is a multi-religious country. Right to religious freedom has been guaranteed in article 20 (a) and article 22 (1) of the Constitution of Pakistan 1973 but unfortunately Pakistani education system denies the right to religious freedom of non-Muslim students and considers them as Muslims. It is pro-Islamic and pro-Muslims and it is designed under article 31 of the Constitution of Pakistan 1973 which guarantees ‘Islamic way of life’. That’s why chapter 4 of the National Education Policy (NEP) is on ‘Islamization of education’. Present Curricula and textbooks have been designed under the influence of the above mentioned article and National Education Policy.

Some examples are presented below to understand the education system of Pakistan;

I seek refuge of Allah from devil, the condemned.

In the name of Allah the most Gracious the most Merciful

There is no god but Allah. Hazrat Muhammad (PBUH) is the Rasool of Allah.

Instructions for teachers and parents

Explain their translation and also tell them to recite Tasmiyah before performing every deed.

Sultan Mahmood Ghaznavi attack on the temple of Somnath.

Students present in the class, the conversation between Sultan Mahmood Ghaznavi and worshippers of Somnath.

During the reign of Aurangzeb, Sikhs started their looting adventures in Punjab and Kashmir. Royal army responded and defeated them in many

1.            Upcoming National Education Policy, curricula and textbooks should be framed under article 20 (a), article 22 (1), article 25 (1), article 28 of the Constitution of Pakistan 1973, article 26 of the Universal Declaration of Human Rights and guidelines of UNESCO.

2.            Contents leading to hate, discrimination, violence, extremism and terrorism which exist in the present curricula and textbooks of all the Textbook Boards of Pakistan should be replaced to the contents that promote peaceful coexistence, human rights, respecting religious diversity, respecting cultural diversity and inclusiveness in the upcoming National Education Policy, Curricula and textbooks keeping in view the agenda of the National Action Plan.

4.            20 additional grace marks should be awarded to the deprived non-Muslim students as it is in the case of Muslim students so that they may also avail the equal opportunity to get admission in higher educational public institutions.

5.            Pakistani textbooks are violating article 22 (1) of the Constitution of Pakistan because Islam is being taught in the subjects of social sciences, physical sciences and languages besides the subject of Islamic Education as a state policy matter because according to article 2 of the Constitution ‘Islam is the state religion’. Non-Muslim students are facing religious persecution. Religious sentiments of non-Muslim students are being hurt because they are forced to study the beliefs of a religion which they do not follow. So, the teachings of a particular religion should be restricted only in the subject of religion to avoid further violation of right to religious freedom.

6.            Five % quota should be ensured for the non-Muslim students in the professional and higher educational public institutions.

Sir, PMTA requests you to kindly design an equality based, value based and inclusive upcoming National Education Policy, curricula and textbooks.