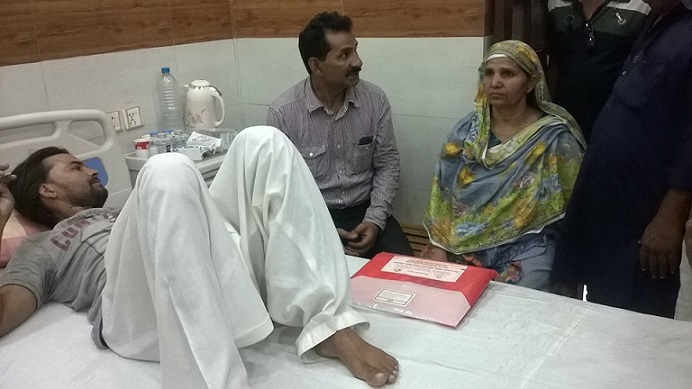 Police continued torturing him mercilessly and gave threats to Kashif Munir Masih at 02:30 am on 23rd May 2019 police left, but Kashif Masih did not walk and he afraid upset. So, he came at home but he did not tell to any one, his wife, mother and father and relatives were harassed and threaten by police.

On 23rd May 2019 Kashif Masih came at Hospital to take leaves for rest, hospital staff asked him what happened, so Kashif Masih told the story and his painful incident to all paramedical staff. So, hospital took action and protested against Panyari Police station.

On 24th May 2019, Advocate Sooba Bhatti, Boota Imtiaz, Amir Gill, Christopher Columbus visited to Civil Hospital Hyderabad and listened his painful story and saw the place of torture. Advocate Sooba Bhatti and Boota Imtiaz gave them encouragement and said we are with you, we will take legal action and will arrange protest at Press Club Hyderabad, so local community members and Kashif Masih’s Relatives protested against Panyari Police station.

They demanded for Justice, legal action against Panyari Police station, Register FIR and give protection to Kashif Masih and his family.

Kashif Munir Masih is a sanitary worker at Civil Hospital Hyderabad, he has three children.