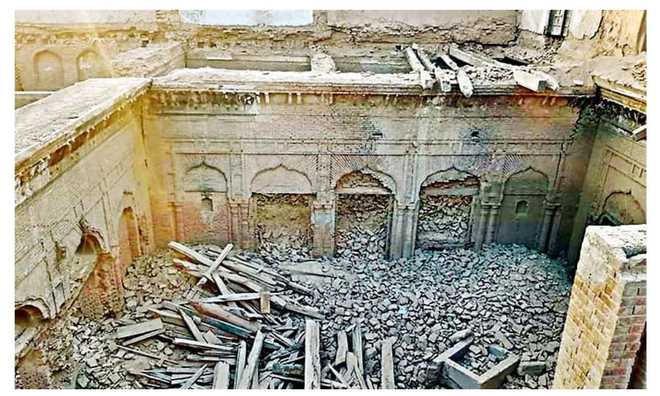 ISLAMABAD/KARACHI: May 28, 2019. (PCP) Pakistan Hindu Council, in order to ensure protection of Hindu holy places of worship places and redress the vulnerable Non-Muslim minority communities, has once again demanded to appoint well-reputed and educated Hindu citizen as Chairman of Evacuee Trust Property Board (ETPB) on priority basis. In a joint statement issued on Tuesday, President Gopal Khamuani and Secretary General Parshotam Ramani expressed anger and displeasure on the recently-published article in a renowned English daily with headline "Historically Guru Nanik Palace partially demolished by Locals in Narowal". The joint statement also revealed that Patron-in-chief of Pakistan Hindu Council Dr Ramesh Vankwani has also written a letter to Prime Minister Imran Khan for recording his protest on the recently-appointed Chairman ETPB from Muslim community.

Pakistan Hindu Council regretted that how mercilessly historically and religiously important sites are under attack by some social evil elements. Elaborating about the importance of reviving faith tourism, President Gopal Khamuani and Secretary General Parshotam Ramani were of the view that the government must focus on exploring and identifying all such sites to attract tourists from across the globe. In this way, the positive image of our beloved country could also be promoted.

"The news article rightly pointed out with photo of demolished palace structure that very valuable beautiful construction has been damaged by some influential elements only for petty material gains," Pakistan Hindu Council regretted, while highlighting that similar precedents can be witnessed all over the country due to no one officially there, to be held responsible for such disasters.

"Only the other day, another tragic incident of equal magnitude was brought to the notice through video clip on Social media." The joint statement said that there is 200 years old historical famous Mandir (temple) of an elevated Sufi saint named Shri Shankar Anand Bharti in Shikarpur city. "Every pilgrim after visiting Main Mandir used to take a dip in sacred waters of Pool there, having been bestowed status of Ganges holy river of Hindu religious," PHC Office-bearers informed. However, the holy pool has completely been demolished by local influentials and even using those bricks, these merciless persons having zero consideration of religious and spiritual emotions, have constructed their houses over the holy site. The statement issued by President Gopal Khamuani and Secretary General Parshotam Ramani expressed angrily.

Moreover, the very land over which the main Historical Mandir still exists magnificently has been transferred in name of a locally influential named Ghous Bux Bhutto, it further SADLY learnt. The statement further highlighted that Supreme Court of Pakistan, in its order dated 24th December 2018, has provided remarkable relief in this regard but the District administration is clearly reluctant to take active action on lame excuses.

"Unfortunately, the Evacuee Trust Property Board (ETPB), which is responsible to administer left out joint and private properties of Hindus and Sikh communities, has continuously been headed by a gentleman from Muslim community who understandably has no knowledge and appreciation of these religious sites and methodology of their maintenance and operation," President Gopal Khamuani and Secretary General Parshotam Ramani said on behalf of Pakistan Hindu Council.

The joint statement also revealed that prominent Hindu lawmaker Dr Ramesh Vankwani, through a letter addressed to Prime Minister Imran Khan, also tried to share the reservations of Hindu community over new appointment of Chairman ETPB, and demanded to appoint a reputed and educated Hindu Chairman ETPB immediately. "It would not be out of context to share here that Dr Ramesh Kumar Vankwani had earlier recommended name of Late Mr. Rana Bhagwan Das, a renowned Retired Justice of Supreme court, still respected across the board in our society, during last regime but to no avail piteously," Pakistan Hindu Council stated.