No to Rape, Child Sexual Abuse and Forced Conversions 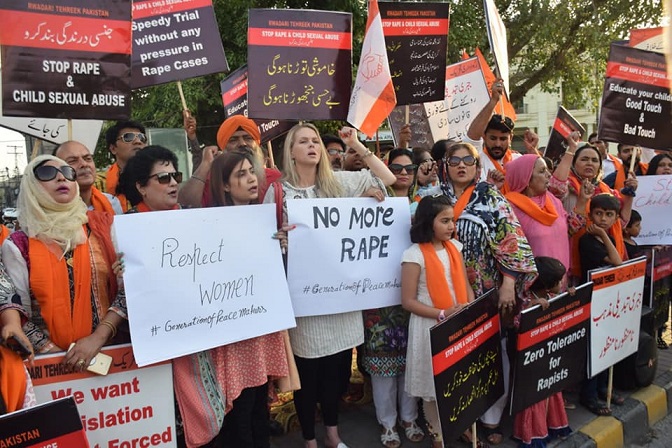 Lahore: June 22, 2019. (PCP) Rwadari Tehreek held a Protest Camp in front of Punjab Assembly on 22nd June, 2019 Rwadari Tehreek to protest against the incidents and trends of Rape, Child Sexual Abuse and Forced Conversions to draw the attention of the federal & provincial governments, concerned departments and institution.

The protest was  led by Chairman Rwadari Tehreek Mr. Samson Salamat and was participated by Office Bearers of Rwadari Tehreek from Punjab, Sindh, Baluchistan, KhyberPakhtukhwa and Azad Jamu and Kashmir including Vice Chairman  Rwadari Tehreek Mr. Deedar Ahmed Mirani and other prominent social activists Shazia Khan and Abida Chaudhary of Awami Workers Party and Mahar Safdar Ali of Bonded Labour Liberation Front who expressed their concerns and asked for concrete steps to stop this menace.

Mr. Samson Salamat addressed the participants and said that “rape, child sexual abuse and incidents of forced conversions has increased the sense of insecurity among the citizens as dozens of both male and female children are subjected to sexual abuse and violence and girls belonging to minority communities are being targeted for forced conversions but   the governments and concerned authorities of human rights are not paying due attention and the victims are being denied justice because of the lacunas in the justice system.

Mr. Samson Salamat further added that Rwadari Tehreek has initiated a countrywide campaign to address this issue and similar protests and other activities shall be held in other provinces and cities to mainstream the issue and draw the attention of the government and other stake-holders”.

Rwadari Tehreek at this occasion demanded that

-          Special sessions of provincial Assemblies, National Assembly and Senate should be held to fully discuss the issue, evaluate the current laws and lacunas and formulate effective implementation mechanisms to stop rape and child sexual abuse and to ensure justice to the victims and their families.

-          Organize awareness sessions of the police officials for their concientization on the important issue of rape and child sexual abuse because mostly the cases are wrongly dealt at the police level and the victims get more victimzed because of the police bad treatment and attitude.

-          Children must be educated in the educational institutions and at home about the good touch and bad touch to avoid sexual abuse.