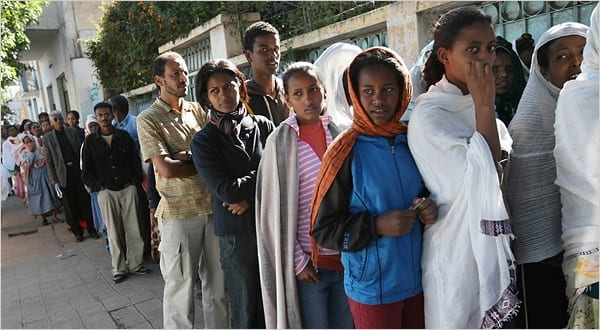 The June 23 raid on the Faith Missions Church in Keren is part of a broader reported crackdown on churches and devoted Christians by the government of President Isaias Afwerki, who has ruled his African nation with an iron fist since it became independent in 1993.

Security forces also confiscated property after entering the church premises, according to Christians familiar with the situation.

CSW’s concerns are shared by Daniela Kravetz, the United Nations Special Rapporteur on the situation of human rights in Eritrea. “These actions show that, despite the improved regional climate for peace and security, the human rights situation in Eritrea remains unchanged,” the official said in published remarks.

Faith Missions Church has been in Eritrea since the early 1950s, and used to run orphanages and schools across the country, explained CSW, which closely followed the case.

The congregation is also one of four “religious communities” still awaiting government registration, despite having submitted the necessary “intrusive documentation” in 2002, CSW complained. “Registration can only be finalized by the president’s signature.”

Eritrean President Isaias Afwerki has ruled with an iron fist forcing thousands to flee, according to activists.

In May 2002, Eritrea introduced a registration policy that effectively outlawed all religious practices not affiliated with the Catholic, Evangelical Lutheran or

Orthodox Christian denominations and Sunni Islam. But even within the recognized churches, Christians have been targeted, including former Muslims who converted to the Christian faith, BosNewsLife learned.

CSW’s Chief Executive Mervyn Thomas told BosNewsLife in a statement that his group is “deeply concerned by this latest development in a crackdown on people of faith in Eritrea” which he added has been ongoing since 2002.

“We call for the immediate and unconditional release of all members of Faith Missions Church, as well as all other prisoners of conscience in the country.”

of Christians in inhumane conditions, including small shipping containers in the scorching heat.”

Additionally, the hardline government also faces activists to accuse Eritrea’s leadership of jailing thousands of political prisoners as part of an attempt to remain control over society.

Refugees from the repressive Red Sea state, including many Christians, have in recent years made up one of the largest contingents of people risking the dangerous journey to seek a new life in Europe.

In its June 2016 report, the United Nations Commission of Inquiry on human rights in Eritrea also found “reasonable grounds to believe” that crimes against humanity have been committed by state officials in a “widespread and systematic manner” since 1991, including the persecution of religious groups.

The United Nations Human Rights Council (HRC) on July 2, will review Eritrea’s human rights record at a gathering with the UN Special Rapporteur whose one-year mandate is up for renewal. Since the establishment of the position, Eritrea reportedly declined to cooperate with the Special Rapporteur or to address the alleged extensive violations.

CSW’s Thomas said that it is “essential that UN member states seize the opportunity presented during next week’s interactive dialogue at the HRC to raise these concerns.” He added that his group urges UN states to “support and facilitate the renewal of the Special Rapporteur’s mandate to ensure continued monitoring of the dire human rights situation in Eritrea.”

Eritrean authorities have denied they are involved in massive rights abuses in a country that has been dubbed by critics as “Africa’s North Korea.”

In a sign of some hope, Eritrea agreed to end hostilities with both nearby Ethiopia and Somalia. However, “How that agreement will play out for the situation of Christians remain to be seen,” added Open Doors. “This extreme pressure and state-sanctioned violence,” it said “are forcing some Christians to flee Eritrea” and seek asylum.

Journalists face difficulties reporting on the country and media beyond the state-sanctioned newspapers and broadcasters are non-existent in this troubled nation of nearly six million people.