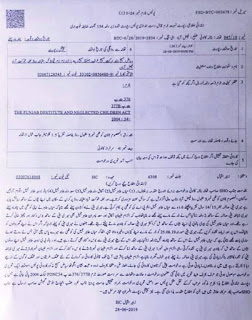 Faisalabad: July 1, 2019. (Mushtaq Gill) Underage Christian, domestic worker, was raped twice and third time escaped of the attempt of rape by a Muslim Politician Mian Tahir Jamil; and his two sons also often sexual abused her and she was tortured by his wife. The victim girl was threatened to be silent otherwise would face dire consequences.

A minor Christian girl, Saima, was being raped and sexual abused by a wealth and influential political Muslim family in Faisalabad where she was doing as a domestic worker from last six months. Her father, Riaz Masih, reported the incident to police station Betala Colony who registered an FIR no.947/2019 under section 376/377B PPC and the Punjab Destitute and Neglected Children Act 2004-34 after preliminary investigation on dated 28 June 2019.

According to the contents of FIR, victim father complained that her daughter age is about 14/15 years and she was doing domestic work at home of a Member of Punjab Assembly namely Mian Tahir Jamil from last six months. Her daughter disclosed the fact that Mian Tahir had committed rape with her two times from last six months and she was threatened not to tell anyone. Mian Tahir Jamil’s sons namely Afaaq and Saad also abused her sexually and her wife Bano Bibi also was torturing her during domestic work. She was also beaten and threatened that she would not tell anyone if she would tell then she would be beaten again.

Within this month of June, one another the 15-year-old Christian girl named Maria was reportedly kidnapped from her house in Shiekhupura city of Punjab at gunpoint. She was gang-raped by five Muslim men including one police man. At the time of the kidnapping, the girl’s father, Jalal Masih, was at his job working as a laborer.

The rapes of Christian’s underage girls are increasing in Pakistan. These recent incidents of rapes have outraged Christians. The resulting court cases are becoming a test for whether Christians can get a fair hearing in this Muslim-majority country Pakistan because often victims’ families get warning to be quiet about the crime because their accused attackers were influential.

LEAD-Legal Evangelical Association Development hopes that these criminal elements of the society must be punished according to the law so that everybody understands that it is not permissible to assault any destitute and neglected Christian girl just because they are influential rich or powerful. These people are monsters and must be punished without mercy.