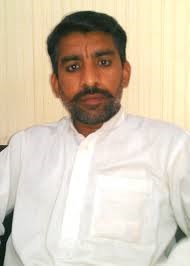 Rawalpindi: July 1, 2019. (PCP) A Pakistani pastor has been incarcerated in Rawalpindi’s Adiala Central Jail since July 2012, when police charged him with the offence of sending blasphemous text messages. On 3 May 2017, Pastor Zafar Bhatti (56 years) was sentenced to life imprisonment for blasphemy, a charge he adamantly denies. Rather peculiarly Pastor Zafar's conviction occurred despite the mobile phone in question not being registered to his name.

On 19 June, blasphemy victim Pastor Zafar’s appeal hearing was adjourned for the seventh time. On this occasion, the stated reason for the postponement was because the presiding judge was due to go on holiday - such whimsical delays are common place in Pakistan where the law courts themselves seem to hold justice in disdain. Mehwish Bhatti BACA's national executive who was in the court was left flabbergasted, she said:

"The case was moving favourably in the direction of Zafar but Justice Raja Shahid Mahmood Abbasi sought a postponement as he would not have time to complete paperwork before existing travel plans.

Despite the fervent remonstrations by Advocate Tahir Bashir for a decision to be made to release Pastor Zafar the Judge said such a decision could not be made as he was off on holiday and had booked flights."

The court then set a future hearing date of 12 September 2019 for a final conclusion to the appeal of Pastor Zafar.

Before his arrest, Zafar founded and led a small NGO called “Jesus World Mission” to assist the poor. He also ran a regular Sunday Church service at his home and the occasional outreach concert. His work would often involve him travelling door-to-door to read the Bible and pray with families in homes he visited.

In July 2012, a local Islamic leader Ibrar Ahmed Khan filed a complaint at New Town police station, Rawalpindi, saying he had been sent messages from an unregistered number insulting the Prophet Mohammed and his mother. He threatened to take matters into its own hands via his followers, if an investigation for blasphemy was not opened under Section 295-C and 295-A of the Pakistan Penal Code.

A First Incident Report was initially lodged against an unknown person, but the police later arrested Pastor Zafar, charging him under section 295-C. They attempted to torture him to extract a confession, but he maintained his innocence.

Jazz telephone company have confirmed that the SIM card for the phone was not registered to Pastor Zafar but was registered to the holder of a different Computerised National Identity Card (CNIC), his colleague Ghazala Khan. In November 2012, Miss Khan was arrested and charged with blasphemy. At her trial in April 2013, Justice Khalid Mehmood of the Lahore High Court refused to pass judgement against her and instead tried to convince the petitioner Ahmed Khan to forgive her. Miss Khan said she was innocent and did not want forgiveness but to be freed on merit. The judge showed her leniency as she was a woman, and granted bail. She died in November 2016 from Hepatitis C, aged 39 years.

In May 2017, Additional District and Session Judge Mohammad Yar Gondal sentenced Zafar to life in prison. Section 295-C mandates the death sentence, but because there was no solid evidence against him, he was sentenced to life imprisonment after a challenge from Advocate Tahir Bashir. Pastor Zafar is waiting for his appeal to be heard which will be heard on 12th September 2019.

In prison, Zafar has experienced pressure from Muslim prisoners to convert to Islam, and has been beaten several times. On 31 March 2013, his food was poisoned, which caused bleeding from the nose and mouth and left him in a critical condition for days. He is kept in high security and is not allowed out of his cell, where he has remained for six years. For security reasons, court proceedings have been carried out by the in his prison cell at Adiala Jail where the judges visited to conduct the trial. Trials in prison cells are an increasing phenomenon in Pakistan due to the heightened levels of intolerance in the country, a process that began two years ago.

Pastor Zafar has developed diabetes since being imprisoned and experiences heart pain and headaches. He feels great sadness over the years he has lost.

On 25 September 2014, mistaken rumors circulated that Bhatti had been killed in his prison cell. It was not Bhatti who been attacked, but the prisoner in the adjacent cell, British Muslim Muhammad Asghar (71 years), who had been sentenced to death for blasphemy. Ashgar, who was arrested in 2010, had a history of mental illness. In the attack, prison guard Muhammad Yousaf, who had been deployed to protect Muhammad Asghar, shot him in the chest. The bullet broke two of his ribs and punctured his right lung, however Mr Ashgar later recovered in hospital. Prison guards responded quickly to the attack and arrested Mr Yousaf, who had planned to kill all prison inmates accused of blasphemy after he was met by a divine presence in a vision while he was asleep, who told him to kill all blasphemers. The swift action of the other prison guards no doubt saved the life of Pastor Zafar.

Zafar and his wife Nawab Bibi (70 years) do not have any children. In May 2017, Nawab spoke with Mehwish Bhatti of the BPCA, and explained that she was very worried because of numerous attempts to kill her husband. She reported that he is bullied everyday and is not safe from inmates or prison staff. She said, “When we meet we cry together and pray seeking God’s intervention,” and added, “Many Muslim people hated how quickly his church was growing. They have taken this action to undermine his work.”

Zafar’s sister Naureen has also spoken of the risk of attack in prison. She said, “My brother has spoken several times of threats received in the cell.”

Nawab lives alone and visits Zafar weekly. She was working as a domestic cleaner in three homes owned by a man who reportedly treated her “like an animal” until she developed double pneumonia and had to be hospitalised. The BACA supported her through her illness and when she was released from hospital took her to a safe house and continue to supported her recovery and sustenance.

Mehwish Bhatti, National Executive for the British Asian Christian Association, said:  "I keep regular contact with Zafar Bhatti and Nawab Bibi who both feel frustrated and depressed by all the postponements they have suffered.

"They are aware that their appeal case is winnable and just want to get this hearing completed so that Zafar and Nawab can begin to restore their former life together.

"They have been praying fervently for freedom and call on other Christians across the globe to pray for success at the September Court hearing."

Juliet Chowdhry, Trustee for the British Pakistani Christian Association, said: "An innocent disabled man has been rotting in a Pakistani prison for coming up to 7 years and yet few people bat an eyelid.

"The mysterious text cannot even be linked to the prisoner and no evidence exists that Zafar was even remotely involved in the crime, which for all intents and purposes seems very contrived.

"It beggars’ belief that a judge can cause a delay of three months to the release of an innocent man who is near his wits end, simply because he is going on a holiday.

"Serious reforms of the Pakistani Judicial system are required so that administrative tasks can be shared with others to see justice done expediently.

22 July 2012: The police arrested Zafar, charging him under Section 295-C of the blasphemy laws.

11 November 2012: Ghazala Khan was arrested and charged with blasphemy in connection with the Zafar Bhatti case – her Computerised National Identity Card was registered against the phone SIM card in question.

8 April 2013: Justice Khalid Mehmood of the Lahore High Court tried Ghazala Khan but refused to pass judgment against her and granted bail. Ghazala died in November 2016.

25 September 2014: Mistaken rumours circulated that Zafar had been killed in his prison cell. British Muslim Blasphemer shot but later recovered from critical condition.

24 April 2017: Zafar’s trial opened. It had to be held in prison because of threats to his life. Judgment was reserved until a later date.

January 2019: The Centre for Legal Aid, Assistance and Development stated that Zafar’s appeal would be heard on 12 February 2019.

21 March 2019: Zafar’s appeal hearing did not take place because of a lawyers’ strike in Rawalpindi. It was rescheduled for 11 April.

11 April 2019: Zafar’s appeal was heard and the judge said that he was minded to release him but would announce the verdict on 25 April.

25 April 2019: At the court hearing, the judge said that there was no evidence against Zafar and that he should be released. The prosecution lawyer said the prosecution needed more time to provide evidence, to which the judge responded that such evidence must be produced within two hours. However, the police superintendent intervened to say that the police also needed time to produce evidence.

The judge said that he wanted to release Zafar but granted an adjournment to 19 June to provide time for the prosecution and the police to produce evidence, the long delay being partly due to Ramadan and Eid taking up the month of May.

25th April 2019: Mehwish Bhatti of the BACA visited Zafar in prison who stated that he was feeling somewhat better. His diabetes is under some level of control but is not helped by the stress he feels. Mehwish said that Zafar seemed encouraged by the report of the appeal hearing.

19 June 2019: Zafar’s appeal hearing was adjourned for the seventh time. On this occasion, it was stated that it was because the presiding judge was due to go on holiday. It is understood that if he had acquitted Zafar, the supplementary documentation requiring his approval could have interfered with his holiday plans. The court set 12th September 2019as the date for the next hearing.