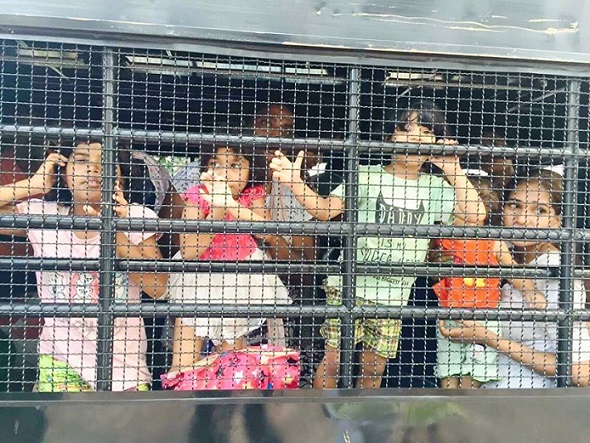 Toronto, Canada: July 9, 2019. (PCP) International Christian Voice has learnt through contacts in Thailand that over 40 Pakistani Christians including women and children have been arrested today by Thai Police. Some of these may already be in the process for immigration to Canada under the private sponsorship program. ICV will collect more reliable information and keep the community posted on details.

These arrests have come as a shock because ICV along with many other community and charitable organizations and Churches have continuously raised the plight of Pakistani Christian Asylum seekers at the highest levels of Canadian government and the UN office in Ottawa.

ICV will immediately again take up this matter forcefully with the relevant authorities to provide relief to the detained individuals. This has been and is the prime focus of ICV for the past few years.

For those who may not be aware of the work that is put into this crisis to raise the profile of the Christian refugee families and high-light their suffering in Thailand, below is a snap shot on a few latest activities in just this past one year.

International Christian Voice (ICV) has put in long hours and intense lobbying to bring the matter urgently to the attention of the highest levels of government for resolution as a matter of priority.

In this one year ICV team had a number of meetings with government officials and members of parliament, including a direct one on one conversation with the Prime Minister Justin Trudeau and fully explained the dire situation of our brothers and sisters in Thailand.

Followed this with a string of meetings including Head of the UNHCR Canada office in Ottawa, Mr. Michael Casaola, meetings with the Office of International Religious Freedom USA at the American Embassy Ottawa, meetings with the new Canadian Ambassador appointed to Pakistan, Ministry of Foreign Affairs meeting with the parliamentary secretary and a number of meetings with MP’s of both major political parties followed with petitions to be read on the floor of the house.

Had a lengthy meetings with the Global affairs team and with the foreign affairs team who updated on results thus far (halt to deportations, issue brought to the Canadian embassy in Thailand, matter raised with the Thai government, commitment to set up meeting with the immigration minister Ahmed Hossen).

This resulted in a meeting with the immigration minister’s Chief of Staff and his team on the situation of Christian asylum seekers in Thailand and neighboring countries.

Assisted by a liberal MP a formal presentation was arranged for International Christian Voice in Ottawa across party lines to present the case for Pakistani Christian Asylum seekers in Thailand fleeing persecution in Pakistan.

ICV visited Thailand this March and met with the Canadian ambassador in Thailand to lay our concerns and seek their help.

This is just a snap shot of the work that goes on behind the scene, much more is done to raise the issue. It is not only ICV but many internationally well-established organizations that have been raising the issue. It is no more hidden under the carpet; the world is very much aware of what is going on in Thailand. However, with nearly over 100,000 asylum seekers from many countries in Thailand and Thailand not being a signatory the 1951 Refugee Convention and does not recognize the status of refugees it is a challenge for all who care to work through this dilemma of asylum seekers.