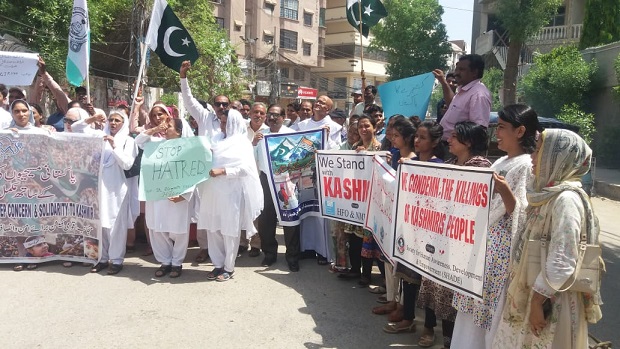 HYDERABAD: August 23, 2019. (By Abbas Kassar) Christian community of Sindh took out a big rally on Friday to express solidarity with and freedom of Kashmiri brothers, sisters and children under oppression and repression of Indian occupied forces since last 70 years.

The participants of rally demanded justice for Kashmiris and asked UNO as well as world community to take notice of mass killings in IOK. They also deplored silence of leaders of world. They expressed reservations on one sided executive order of Indian government led by anti – Mulsim Nirender Modi to end special status of Kasmir by cancelling article 370 of Indian constitution.

They also demanded Indian leadership to hold talks with Pakistan leadership on peace and justice to Kashmiris. They said Chursh and Christian community was with Kashmirs and expressed solidarity with them.They asked UNO, world community and human rights organization to play their role to stop India from brutalities in IOK.