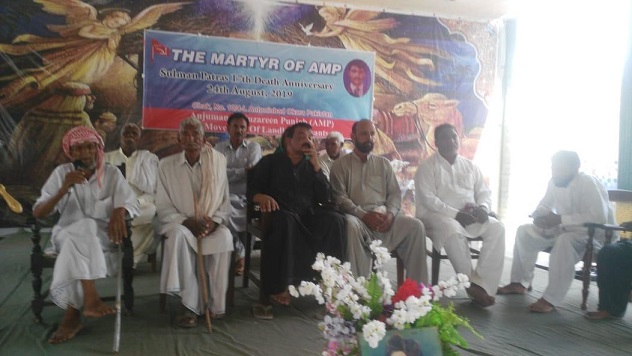 Okara Pakistan: August 26, 2019. (PCP) Anjuman -e- Muzareen Punjab Pakistan (AMP) organized a public gathering in Chak No.10/4-L Distt. Okara, the Punjab. Its purpose was to celebrate the tenant Suleman Patras’s 17th death anniversary on August 24, 2019. It is commemorated every year. Sulman was shot dead in a clash between the tenants (AMP) and the law-enforcing agencies during the Peaceful protest rally organized by AMP, near Chak No. 4/4-L Okara. They fired shot people to prevent people claiming ownership rights to the land, where they have been for a century.

and others. The law-enforcing agencies stopped a woman in her labour-pains and detained where the delivery took place. The baby died and the woman was taken to hospital in a critical condition. Several tenants have been paralyzed.

Thousands of Tenant’s men and women, children were participated this occasion. They were spoke AMP slogans and song Like Malki ya Maut (Ownership or Death), Jara waway ohi Kahway.

The various speakers re-affirming their support for the cause of the peasants and fiery speeches and songs gave encouragement and awareness to the tenants to go forward. The peasants waving red flags demonstrated their resolve to fight to the end and justify their slogan of Malki ya Maut (Ownership or Death).

At the end of the program Tenant Flag was raised on Sulman Patras Grave. Red rose petals covered the whole grave of Martyr. The fragrance of roses spread everywhere in the graveyard.