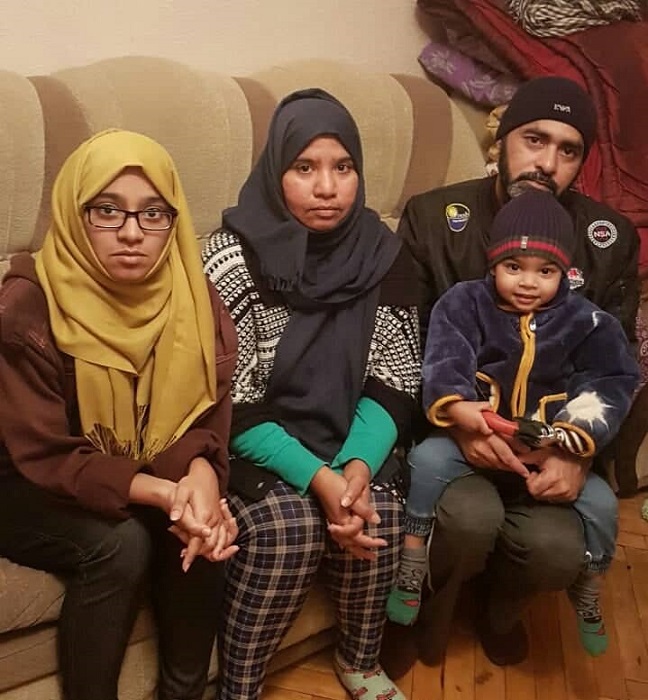 She was still secretly reading the bible when she married her family friend, and car accessory shop owner, Abdul Waheed Noor Islam (45 yrs), in 2002.

Her husband threatened to divorce his wife after she divulged her conversion to him but changed his mind, for the sake of their daughter, Warda, (16 yrs) and son Saif, (3 yrs), despite demands via his family in Bangladesh. Mr Noor gradually became more tolerant of his wife practicing her new faith, even allowing her to attend church with their daughter over time.

The couple lived a relatively happy life despite receiving death threats from Safiya’s Pakistani family if she went back to Pakistan, until Mr. Waheed’s business partner and sponsor, Mr. Abdullah Khalifa, (45 yrs), refused to renew their business shop licence after learning of Safiya's conversion from Islam. In a fit of anger Mr Khalifa was then punched by Mr Noor triggering a very dangerous situation for the family.

Fearing arrest, the family escaped to Azerbaijan on a tourist visa but as their savings were running out just before their visa expired the couple sought the help of a Pakistani Muslim friend, Ali Abbas (39).

Mr. Abbas further advised that they would be allowed to stay in Azerbaijan if they invested $15,000 in a business that had to be registered. he proposed to first list the new business in his own name, as he had a business visa, and promised to transfer the ownership back to them at a later date. Mr. Abbas has since disappeared and is not returning Mr Noor's calls.

The family have since been refused visas from their countries of origin, Bangladesh and Pakistan and have also been refused asylum in Azerbaijan via the United Nations Human Rights Commissioner (UNHCR) and initially faced a demoralising deportation on 9th September, after having lived there for 15 months. Since then however, through the efforts of BPCA and other humanitarians an extension of one month has been given to the family giving them a real sense of hope:

Safiya who attends the Baku international Fellowship and has now along with her daughter been baptised told us:

“I know that Christianity is not easy life but still my faith is much stronger than these problems. My parents are dead, and my brothers and sisters are not with me but still I trust In Jesus.”

BPCA is seeking to help the family migrate where Safiya and Warda can practice their faith and the family can live in peace. “You know when my mom used to go at church when we were in dubai.

“She used to tell me about things that happened to her like she felt Jesus Christ's touch she felt his existence that he is with her and she told me about miracles that happened in her life.

“Now we also have problems in our life but we will not leave our faith because we never felt what we feel now and whenever we pray calling his name 'Jesus Christ' we feel that he will do for us because he knows what's better for us because he saved us till now together.

“This same goes from me as well.”

Our goal is to get the family to any safe country and we have produced a country expert report that has been sent to both the Azerbaijan authorities and to the UNHCR in Azerbaijan. Juliet Chowdhry, spokesperson for the BACA, said:

"We and other humanitarians have been pursuing a termination of the deportation process and were pleased to hear of the one-month extension.

"This gives all the parties assisting this family time to galvanize support for the family and hopefully secure a Canadian sponsorship.

"An approach has been made to an experienced Sponsorship Agreement Holder SAH and with their help we hope to find a long term solution that provides the whole family with refuge together."

Time is limited so we implore others to join our campaign that we might convince Azerbaijan authorities to halt deportation and for the United Nations Commissioner for Human Rights UNHCR to assist this beleaguered family, as they seek a country where they can live in safety and practice their faith unfettered.