HBWWF demand social security, pension and other benefits under law 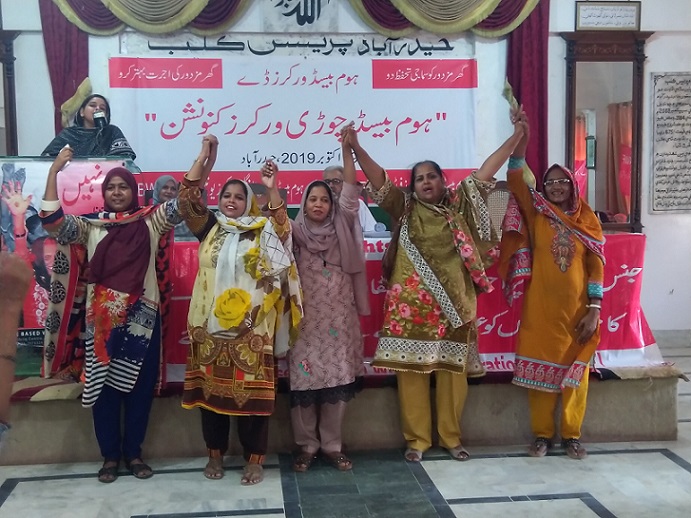 HYDERABAD: October 20, 2019. (By Abbas Kassar) Home based Women Workers Federation has demanded from government to grant them social security, pension and all benefits under labour laws. Demand was raised in convention of home-based women workers federation organized at press club here Saturday. In another resolution convention demanded that like Sindh home based laws be passed across Pakistan and practical steps be taken to implement same. Leaders of homebased women workers were addressing convention of home based bangle workers on HBWW labour day. Convention was chaired by Jamila Abdul Latif general secretary of home based bangle women workers federation while Mehboob Qureshi was chief guest of National Trade Union Federation. Women bangle workers attended the convention in large number.

Shakila Khan president of home based women workers federation said they were thankful to Sindh assembly for passing home based workers act which gave recognition to thousands of women workers but it has been very difficult to enforce law by not passing its rules and bylaws. She said they will feel happy when this law was implemented.

Chief guest Mehboob Qureshi paid tributes to home based women workers that through their struggle they have achieved landmark that was otherwise of unbecoming. He said today situation is that factory workers were getting leadership of women workers for their organizational matters. He demanded Sindh government should issue notification of rules and regulations of Home Based Women Workers Act without further delay and allow compensation as per new notification issued recently. He also demanded that home based workers of other provinces be also accepted as workers under labour law and that process of law to register home based workers with social security and oldage benefits organizations. He also demanded wage board be allowed to other home based workers on lines of bangle workers. Qureshi demanded government of Pakistan implement ILO convention 177. He asked for registration of home based workers along with contractors. He also demanded to follow law against those harassing women workers at workplaces. Sindh government earmark funds for welfare of home based workers in annual budgets. At end of convention, election for bangle workers union and its area units was held where in Jamila Abdul Latif was elected as general secretary of Home based Bangle Workers union, Bushra Dilawar as finance secretary, Akbari, Ghulam Ali, Shazia Shakil, Shahid Litif and others were elected.