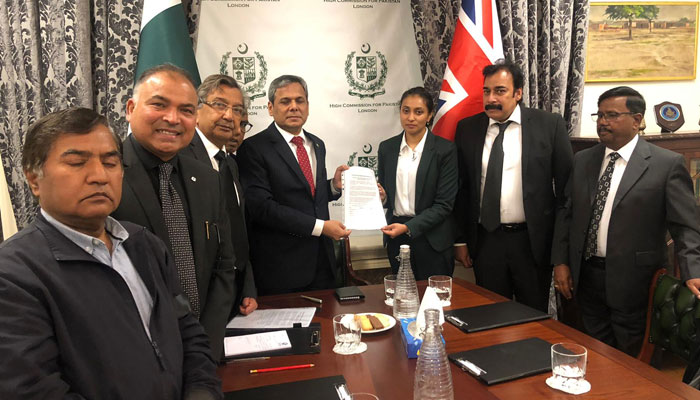 London: October 21, 2019. (By John Bosco) As soon as the news of Edwardes College, Peshawar Pakistan spread in Pakistan and across the globe that the nonstop intervention in the college affairs, by the KP government, and later the Peshawar High Court’s decision overturning its own earlier judgement, this has badly wounded Pakistani Christians.  Decisions taken in the past were so painful - Christians in Pakistan has a long depriving history, when late Zulfiqar Ali Bhutto Nationalised Christians’ Educational Institutions, in which they have lost their properties but on top of that the standard of education has significantly decreased.

From the past 3-4 months Pakistani Christians are playing their roles through Diplomatic Channels, Electronic, Print and Social Medias and also arranged Protests at various cities in Pakistan.

They strongly condemned the action of Peshawar High Court, which created misery amongst Pakistani Christians and forcefully reacted the negative attitude of PTI KPK government, which came into power with the slogan of justice but hungry of illegal possession of Edwards College.  They also emphasised since 1972 there was no Christian Education Institution was nationalised in KPK Province.  From 2016 till the recent High Court, Peshawar’s decision KPK Government couldn’t produce any credible documented evidence.

Overall the Pakistani Christian community has called on Prime Minister Imran Khan to issue an executive Order to confirm that Edwardes College Peshawar will remain a private Christian institute and will not be nationalised.

The Christian community leaders have accused the Khyber Pakhtunkhwa government of interfering in the affairs of Edwardes College.  Several protest meetings have been held in the UK cities in one month and several more events are in the pipeline to draw attention of Pakistani authorities towards the concerns of Christian community.

A couple of weeks back a delegation of leading British Pakistani Christian community members met Pakistan’s High Commissioner to the UK Nafees Zakaria, the meeting with the Pakistan High Commissioner has been arranged by Councillor Dr James Shera MBE, ex-Mayor of Rugby, who is playing very active role; delegation included Dr Peter David; Councillor Morris Johns; Advocate Qamar Shams; Dr Noshaba Khiljee; Mr. Michael Massey, Dr. Akhter Injeeli and Mr. John Bosco. They have informed the High Commissioner about the worries of the Christians. They have informed the Government’s representative about their dissatisfaction over the recent decision by the Peshawar High Court to declare the Edwardes College, Peshawar a nationalised institute.

The delegation handed over a petition to the Pakistani envoy which said: “We believe that continuous and incessant interference in the college affairs, and harassment of the college principal by the KP government, and now the Peshawar High Court’s decision overturning its own earlier judgement, has created a sense of insecurity among the non-Muslim Pakistanis in general and Christians in particular.

“The college has been providing excellent education to students of all creeds and nationalities without discrimination over the past 120 years. It has produced some of the most famous Pakistanis in the fields of science, arts, literature, sports and armed forces. It is worth remembering that the education standards in the Christian colleges, which were nationalised in 1974, have declined sharply.”

It added, “Sir, you yourself had given an undertaking in 2014, that the college will not be nationalised and remain an independent Christian college. We believe that this attempt to nationalise will lower the education service provided to the students in the KP. It will harm the reputation of Pakistan as a minority friendly country and negate your excellent speech at the UN recently. It is also against the vision of Pakistan, outlined in the father of nation’s speech of 11 Aug 1947.”

History is evident, Edwardes College was established in 1900 by the Church Missionary Society (CMS) and is a private educational institution funded by its own resources; no budget allocation has been made by the provincial government for running the affairs of the institution and the college has independent financial as well as administrative status.

Edwardes College was not nationalised in 1972.

John Bosco said, “After the dismissal of government of Khyber Pakhtunkhwa petition under 12(2) CPC against the judgement of 105-P/2016, Bishop, Diocese of Peshawar, Church of Pakistan after informing the Governor, Khyber Pakhtunkhwa and Prime Minister Imran Khan restored college BOG under the Edwardes College Constitution.

“Government of Khyber Pakhtunkhwa filed once again application under 12(2) CPC in June 2019 against the earlier judgement in the WP 105-P/16 with a claim that, Edwardes College has already been nationalised along with its property under the notification of 1974. Government requested the Peshawar High Court, Peshawar to set aside its earlier judgement in the WP 205-P/2016.

Overseas Christian Diaspora has full confidence that their efforts will bring the justice and they are hopeful the media abroad will continue to raise this issue.