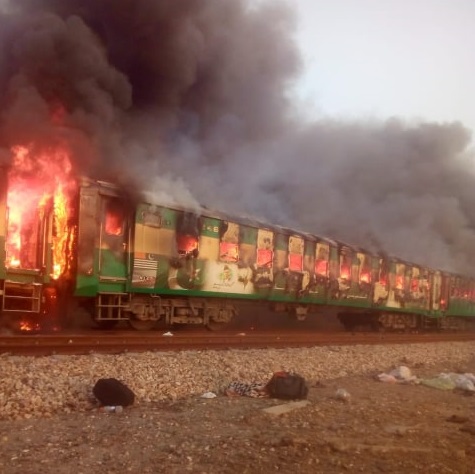 Lahore: November 1, 2019. (PCP) A fire on a train from Karachi to Rawal Pindi has resulted in the death of 74 travelers at the last count and injured at least 40 others. The fire is believed to have begun after a portable gas canister being used by passengers to cook a traditional Pakistani breakfast exploded. Three carriages were set alight by the explosion as fire rapidly spread through the moving train. The accident took place near the town of Liaquatpur, about 150 kilometers (93 miles) south of the city of Multan on Thursday morning. A statement via Pakistan's Prime Minister Imran Khan shared his sorrow after the even and suggested that most of the deaths associated with this accident were a result from passengers jumping from the train and not as a consequence of the fire itself - though images of the fire ripping through the carriages are extremely alarming to watch.

The incident occurred near the town of Liaquatpur, about 150 kilometers (93 miles) south of the city of Multan on Thursday morning. Eyewitness have said that train staff had spoken to the family using the stove to cook their breakfast and had instructed them to terminate their activity, however the family were ignored when cooking began in earnest moments later.

The carrying of portable gas stoves on a train is against train safety rules but the poorest passengers in Pakistani trains are habitual abusers of the rules. Reasons for this non-compliance is believed to be based on the exorbitant cost of food on long train journeys where hot food is sold at a premium and lax security that allows for such cooking to be undertaken without hindrance.

Minister for Railways Sheikh Rashid Ahmed told Geo TV: Two cooking stoves blew up. They were cooking, they had (cooking) oil which added fuel to fire

Only 15 individuals from the total death count have been identified by their physical features of which only 10 corpses have been handed over to their families, the other 5 corpses have been stored at the morgue at Gurmukh Ram hospital in Liaquatpur, Rahim Yar Khan - awaiting handover.

59 corpses have been sent to Sheikh Zayed hospital in Rahim Yar Khan for DNA testing as their physical features have been rendered unrecognisable due to severe burns.

Only DNA matching can reveal identity of some deceased passengers.

A further 40 passengers were injured of which 9 individuals who were critically burnt have been admitted at Multan hospital one of the few Pakistani hospitals with a specialist burns unit. A further have been sent to other hospitals including 44 at Bhawalupur Victoria Hospital.

Passengers state that It had taken 20 minutes for the train operators to immobilize the train which meant that the initial fire spread backwards rapidly as the momentum of the journey pulled at the fire. Pakistan An emergency response consisting of Pakistan Railways officers, the Pakistan Army, paramedical staff, the fire brigade and other rescue teams arrived around 10 minutes later. It should be noted that a Pakistan Railway spokesperson has said their was nothing wrong with the trains braking system and insist the train was stopped within 3 minutes.

Eventually the three burning carriages were separated from the main train and the unaffected carriages continued their journey, with passengers in a state of shock and anxiety. Now the three burnt coaches are standing on a maintenance track at Chuni Got Railway Station in Rahim Yar Khan where they will be investigated for further information.

BACA representative Pastor Saeed Akhtar of Philadelphia Pentecostal Church visited local hospitals and the railway station, in an attempt to make contact with survivors to provide prayer support and to see how else we could assist. Due to the chaotic situation he was not able to visit survivors at the hospital but tomorrow he aims to meet and pray with them. Already contact has been made with one Christian family who survived after having lost a family member.

Mehboob Masih (50 yrs) son of Rehmat Masih was travelling to Lahore from Karachi after attendance at the funeral of a paternal uncle in Karachi, 5 days ago. Travelling with him were his paternal aunt Khursheed bibi (70 yrs), his three cousins Gulzar Masih (51yrs), Saif Masih (47yrs), llyas (47yrs) and paternal Uncle Zahoor (66 yrs) who all reside in Gujranwala.

The family were all standing in the economy carriage nearest to the three burning carriage and saw the eruption in flames of the third carriage from the end. In a state of panic Mehboob leapt from the train believing the fire would consume his carriage while the rest of the family who had become separated, fled to the front end of the carriage away from the three burning carriages. He died sometime later from injuries sustained from his leap and it is believed his end would have been a very painful one. His dead body was later identified by the distressed surviving members of his family travelling party who have taken his body to Mehboob's home in Lahore where he will be buried tomorrow at 2.30pm. Mehboob leaves behind a wife and three children who will now have to survive without their breadwinner and guardian. Our national executive in Pakistan Mehwish Bhatti who has consoled and counselled the family has been invited to attend the funeral and will be present. BACA have already agreed to fund all cost for the funeral for the family.

Mehwish Bhatti earlier today spoke to UCB (United Christian Broadcasting) radio briefing about the situation in Pakistan. She explained that many of the people on board the train were heading to a protest in the Pakistani capital of Islamabad. You can hear her interview click here. Juliet Chowdhry a trustee for BACA also spoke with UCB.

British Asian Christian Association, has written a letter of condolence to the Pakistan High Commission in London and will be presenting a wreath if flowers in solidarity and to express our common grief.