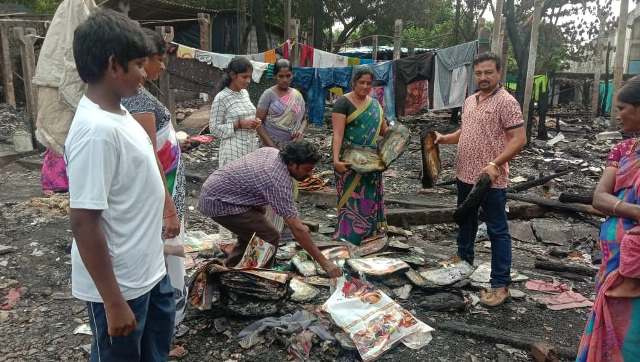 Andra Pradesh, India: November 2, 2019. (PCP) 73 Indian Christians from the town of Sajjapuram Tanuka, Andra Pradesh, returned home from Church after a riveting Sunday service to find that their bamboo homes had been destroyed in a violent fire. Despite their loss the entire community has thanked God that he protected them all in the confines of their church building 5km away, while the fire ravaged through their properties.

On 27th of October 2019 while revellers of a small Christian enclave in Andra Pradesh attended Prayer Power Church, 5km from their village at 10.30am, they were left unaware of their homes being razed to the ground while they worshipped in safety.

When the Christian villagers returned home at 12.30pm they were shocked by the visual devastation of their homes and many of the women wept as their husbands rushed to put out the residual fire. Calls were made to the fires service and other emergency partners and a concerted effort began to quell the fire and make the area safe. But it was too late to save any of the homes and every family lost their home immediately during the tragic incident.

Hours later after the fire had been put out and the properties were safe enough to peruse for any salvageable possessions families began to retrieve what they could. Unfortunately, little was yielded from their search and the Christian residents had to accept that most of what they had owned was lost forever.

After forensic police and fire service officers investigated the incident, they concluded that the fire had began after a gas canister had exploded. They have been very clear in their analysis that had residents been present in their homes during the fire there would have been many lives lost to the fire. The fire spread through the dry bamboo homes in a matter of minutes and a sever death count near miss was avoided by the families being present at a church service during the main blaze.

Christians have praised God for keeping them safe especially as on the day of the incident the faithful Christians were all in attendance at church, none of them had been late and no-one remained home due to sickness.

Talking to BACA Jai Raju (25 yrs) one of the local residents shared the debilitating account of his lost life savings. Unable to open a bank account he placed his hard-earned 520,000 rupee (£5658) savings in a box hidden in his home and told no-one about it. He had been struggling for 3 years to save for the wedding of his nephew and now feels devastated that he will have no gift to give.

"It is a hard and bitter pill to swallow.

"I was looking forward to the gleam in my nephews’ eye when I helped with his wedding costs.

"This loss has affected me badly but I do not blame God - he saved my life and this is only money.

"I will find a way to restore the money and will never stop rejoicing for the lives - including my nephew and I - that God has spared."

Most of the local people had been involved in collecting old plastic which they had been selling to local recycling factories to earn a living, their income is extremely low and they were forced to live in bamboo homes which are affordable. Few complain about their situation and most of those that BACA met weer simply pleased to be alive and gracious for the lot that God had given them.

No local newspaper or channel has covered the news so far and no charities haven offered any help to families. The local authorities have begun to help the beleaguered community by providing cooked food and temporary accommodation nearby. However, no compensation is to be offered for their lost homes and possessions

Some residents have left their town to live with their relatives nearby until they are able to rebuild their homes, however on the pittance they earn it will take many years for them to restore their homes and lost property, especially as many have lost their life savings to the fire. Others are living in raw nature or under trees with sheets while they eke out an existence.

"A tragic incident with a gas canister has left so many families desolate and desperate for assistance.

"Families which once could provide for themselves and who had shelter from the weather are unsure of their future and without protection from natures elements.

"Simple techniques like keeping canisters away from the home when storing, and how to operate and maintain such cylinders should be given by the Indian Government.

"Images of gas cylinders that are rusted and dangerous are a bad indictment on the safety laws and their enforcement in one of the largest economies in the world.