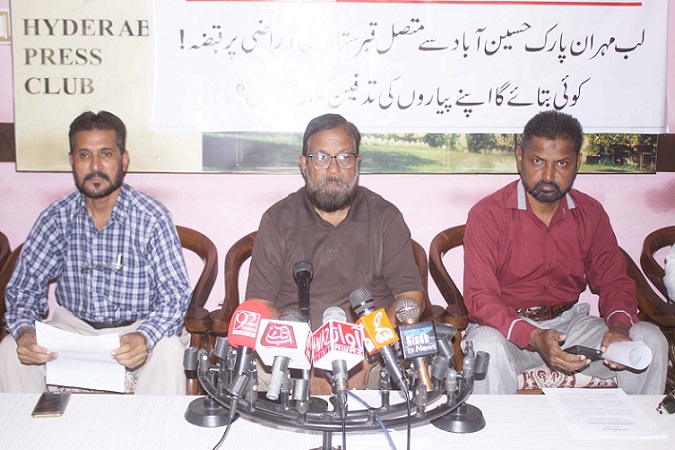 Hyderabad: November 4, 2019. (BY ABBAS KASSAR) Hyderabad lovers, a group of senior citizens, led by Abdul Jabbar Rehmani chairman of Bunyadi Huqooq Commission Pakistan, have expressed indignation on silence of concerned departments and local bodies over land grabbing of city graveyard lands by unscrupulous elements who have been depriving citizens of where to bury their dead. Addressing news conference at press club here Monday Rehmani and others told media that Hyderabad is city of 3 million people but unfortunately, they have no graveyard for burying dead bodies of their beloved ones. Whatever present graveyards these have no more scope for burying. Furthermore, that sewerage water has further rendered the graveyards of no use. They told that main graveyards of city including those of Tando Yousuf, GOR colony, Pathan colony and others were in worst condition. Nago Shah and Bukhari graveyards have also been completely been filled up with no more space for any grave.

Rehmani told that Taluka Latifabad municipal administration had allocated 2 acres land for graveyard at Lab Mehran park Hussainabad. But he said as the administration had not erected compound wall due to which land grabbers cleaned their hands-on graveyard land by occupying it and made pucca constructions. Many land grabbers resold these plots and homes. This purchase and sale of graveyard land still continues. He said even public departments had issued NOCs for power, gas and water supply to land grabbers. He said such unscrupulous persons have even demolished graves at Nago Shah graveyard Hussainabad and built homes upon grave lands. Revenue department and local bodies were still sleeping and have no care for where dead be buried.

At the end Hyderabad Lovers demanded to get vacated graveyard land of Lab Mehran Park; to remove all illegal constructions over graveyard lands; to construct compound walls around graveyards and that patronizers of land grabbing be brought to book. Others who accompanied Abdul Jabbar Rehmani were Haji Muhammad Hanif Qureshi, Abdul Rehman Qureshi, Umar Farooq Abbasi, Muhammad Nadeem Abhasi and Hamza Abbasi.