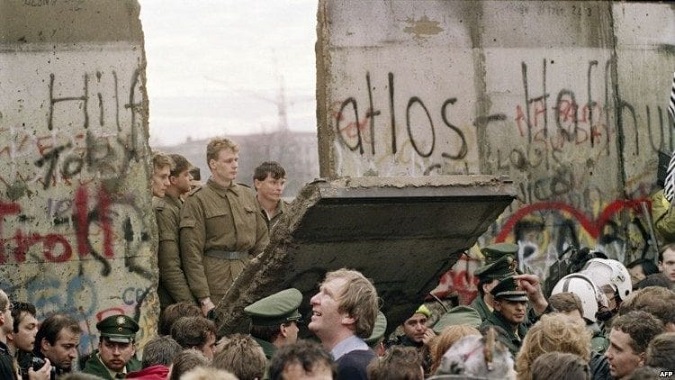 BERLIN/BUDAPEST: November 15, 2019. (Stefan J Bos for BosNewsLife) Germany and its allies marked the 30th anniversary of the opening of the Berlin Wall, a historic moment in events that ended Communism in eastern Europe. And, it gave hope to devoted Catholics and others who suffered for their faith during decades of Communist dictatorship.

For decades the Church had been praying for the opening of the Berlin Wall. The enormous concrete barrier that divided Berlin from 1961 to 1989 came to symbolize the “Iron Curtain.” It separated free Western Europe and the Communist-ruled countries of the Eastern Bloc, where millions were persecuted for their faith and opinions during the Cold War.

Finally, on November 9, 1989, the Wall nearly collapsed under the weight of the calls for freedom.  East German border guards no halted huge crowds seeking to enter the West. Residents from East and West Berlin cried tears of joy as they hugged each other.

On Saturday, leaders from Germany and former Communist nations Poland, Hungary as well as Slovakia and the Czech Republic attended a ceremony at Bernauer Strasse. It’s here one of the last parts of the Berlin Wall remains. They placed roses in gaps in the once-fearsome barrier that divided the city for 28 years.

The fall of the Berlin Wall meant an answer to prayers of then Pope John Paul II. “The moment has come for Western Europeans to help their brothers fully reclaim the place that is rightfully theirs in Europe. Both now and in the future,” he said.

The Polish-born pontiff had played a crucial spiritual role in unifying Europe in freedom.

He was the first Pope to enter a Communist country when he visited his native country in June of 1979. The Pope often made references to the freedom sought by millions in Eastern Europe. The fall of the Berlin Wall also impacted the life of his successor, German-born Benedict XVI who remembered those who suffered for trying to escape to the West.

“We recall that border of death, which for many years divided our homeland, and forcefully separated people, families, and friends,” he said.

German Chancellor Angela Merkel, who grew up in East Germany, also acknowledged this suffering on Saturday, while speaking at a memorial service in a small chapel near where the Wall once stood. “I remember the people who were killed near the Wall because they sought freedom, she recalled.

“And I also remember the 75,000 people who were detained because they tried to escape East Germany and those who suffered because relatives had fled the country,” the chancellor added.

But she added that history teaches that no wall that keeps people out and restricts freedom is so high or so wide that it can’t be broken down.

Pope Francis agrees. “Where there are walls, there are closed hearts,” the Pope says. “We need bridges, not walls.”

But Pope Francis and German Chancellor Merkel remember that November 9 remains a painful moment in Germany’s troubled history: It also marks the anniversary of the so-called Night of Broken Glass, an anti-Jewish pogrom in 1938 that foreshadowed the Nazi’s Holocaust.

However, organizers hope those ceremonies throughout Berlin and other parts of Germany to mark the fall of the Wall, including a concert at Berlin’s iconic Brandenburg Gate, will show a unified Germany open to all peoples regardless of their background and faith.