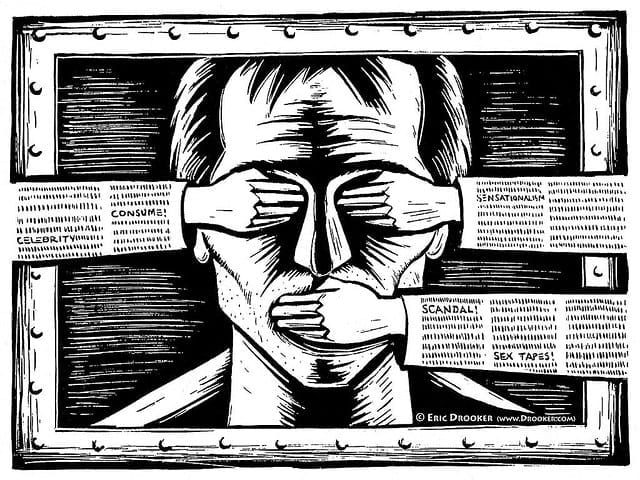 BUDAPEST, HUNGARY: (BosNewsLife) The world’s largest press watchdogs say the government of Hungary’s increasingly authoritarian Prime Minister Viktor Orbán has achieved “a degree of media control unprecedented” in any European Union member state.” Hungarian journalists interviewed by the groups described a “coordinated system of censorship and content control” not seen since the fall of the Hungarian Communist regime in 1989.

“Since 2010, the Hungarian government has systematically dismantled media independence, freedom, and pluralism, distorted the media market and divided the journalistic community in the country, achieving a degree of media control unprecedented in an EU member state,” the groups stressed.

The conclusions were released Wednesday, December 4, in a report by the International Press Institute (IPI), Article 19, the Committee to Protect Journalists (CPJ), the European Centre for Press and Media Freedom (ECPFM), the European Federation of Journalists (EFJ), Free Press Unlimited (FPU) and Reporters Without Borders (RSF). Their findings are also backed by the South East Europe Media Organisation (SEEMO).

Delegates arrived while posters were seen in Budapest showing two investigative journalists Gábor Miklósi and Andras Dezso of the Index website, in front of an Israeli flag with the mentions: “We, too, came from across the border!”; “Constant squabbling, latent anti-Hungarian, treason.” The action was strongly condemned by the National Association of Hungarian Journalists (MÚOSZ) and the US and Israeli embassies in Budapest.

The latest report on media freedom was based on a November 25-27 visit when the international press groups spoke with Hungarian journalists from Budapest and other cities as well as civil society groups. The delegation also met with Zoltán Kovács, Hungary’s state secretary in charge of international communications and the recently elected liberal Budapest Mayor Gergely Karácsony.

“The division between pro-government media and independent media has replaced ideological dividing lines; the remaining left- and right-wing independent media in Hungary are regularly smeared as political activists, “Hungary-haters,” foreign agents or traitors,” the report said. “They are being starved into submission through the state’s abuse of public resources and harassment of private advertisers, even as the government shovels vast sums of taxpayer money into its own media mouthpieces.”

It noted that “While avoiding the physical violence or the jailing of journalists common in autocratic regimes elsewhere, the Hungarian government has pursued a clear strategy to silence the critical press.”

That allegedly happened “through deliberate manipulation of the media market – engineering the forcible closure or effective government takeover of once-independent media – and through the delegitimization of journalists.”

The report said that the “construction of a pro-government media empire serves as a vast propaganda machine for the government of Prime Minister Viktor Orbán, insulating large parts of the public from access to critical news and information to maintain the Fidesz party’s hold on power.”

State secretary Kovács denied wrongdoing and said it was not the media’s role to control power and described independent journalists as political activists. In a statement obtained by BosNewsLife, he also suggested that the groups were paid by US investor George Soros, who was born in Hungary, where he survived the Holocaust.

Soros prominently featured on the government’s anti-migration posters that critics said had anti-Semitic undertones. “Shocker! The Soros-funded international coalition says Hungary’s press freedom in danger,” said Kovács about the report. “Let’s be clear about one thing: There’s nothing independent about this international coalition. They had already arrived at their conclusion about media freedom before they arrived in Hungary. Of course, you won’t find this in their report,” he said.

Kovacs also claimed that the most popular liberal website had more page views that the government-leaning online outlets combined. But he admitted that only 35 percent of the population gets its news and information online. Independent journalists interviewed for the report stressed that Russian disinformation – a strong concern elsewhere in the region – “is absent or weak in Hungary.” But they claimed that “the public broadcaster, now deformed into a state broadcaster, effectively plays this role, together with the pro-government KESMA media group.”

Independent journalists are also subject “to pervasive discrimination by the state” and “denied access to publicly held information,” the report said. It even confirmed findings by BosNewsLife that critical journalists are often “excluded from official events and prevented or actively hindered from communicating with public officials.”

The report also said that “Readers and viewers who do not actively look for alternative sources of news (mainly online) receive a virtually exclusively government narrative given the government’s level of control over the print, radio, and television markets.” The groups stressed that the impact of the independent press “is highly limited as the state apparatus simply ignore the outcomes of journalistic investigations due to informal government control over key institutions, including prosecutor’s offices.”

In general, “the independent press often finds itself fact-checking and countering the misinformation spread by the pro-government media, thus losing the possibility to influence public discourse,” the report noted. It also said that “financial stress, job loss, self-censorship and bureaucratic harassment” have gravely damaged the profession, hindering its ability to perform “its much-needed watchdog role.”

The report urges the EU to help halt the perceived crackdown on media in its member state Hungary where the government “gravely damaged the Hungarian public’s right to information.” The perceived media attacks “are also already being exported to neighboring countries, both existing EU member states and candidate countries,” the groups said.

They urged the EU to “Condemn all attacks on journalists in Hungary, including pervasive anti-media rhetoric that delegitimizes journalists and journalism as an essential element of democracy.”

The groups also asked funds for investigative journalism at a time of mounting concerns about corruption in Hungary. The Hungarian government was asked to

“Recognize the importance of media freedom and media pluralism to democracy and take meaningful action to restore these values to the Hungarian media environment.”

But there were no indications the government would change its perceived hardline media policies or take over the recommendations. “A fact-finding mission like this, composed of individuals and groups funded by a man who has publicly stated his opposition to the Orbán Government and our policies, cannot credibly claim to be independent,” Kovács said referring to George Soros.

His statement about Soros funding all the mentioned organizations remained doubtful. The report’s participant IFJ, for instance, was founded in 1926. It is also the world’s largest organization of journalists, representing 600,000 media professionals in 187 contributing unions and associations in more than 140 countries.