Student rally against nationalization of Christian college of Peshawar 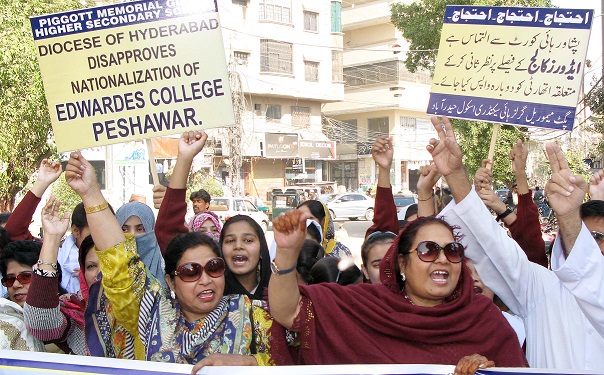 The rally. They demanded from government to give up illegal occupation of Edward college Peshawar which was precious Asset of Christian community and it be handed over back to Diocese of Peshawar Church.

They made appeal to president, prime minister and chief justice of Pakistan and Army chief and human rights bodies.

To take notice of illegal occupation and order handing over back the college to Christian community so to end concern and increasing feeling of disappointment from among them. They further demanded to follow principles of father of Nation Quaide Azam Muhammad Ali Jinnah and protection of lives and properties of minorities be assured. They said Freedom and equality was their basic right and that injustices with Christians be eliminated. They also demanded that Their educational system may not be destroyed on basis of bias, ego and discrimination. They said their educational System had created big personalities. The participants were carrying big banners inscribed with slogans of protection To minorities, end injustices and we be given protection, etc.