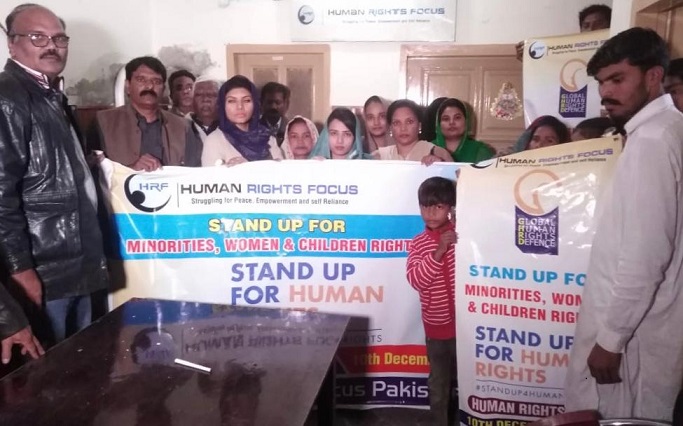 Naveed Walter, President of Human Rights Focus Pakistan (HRFP) said that the equal status should be a top priority for every citizen regardless of religion, race, language, birth, gender, opinion, sect or caste, physical or mental disabilities etc., he added more. The minorities, women and children are considered the soft targets unfortunately while the young people represent majority of the population but they are affected by conflicts, exclusions and economic instabilities which makes harder for them to be heard by authorities when they have no influence in decision making processes. Naveed Walter said further that the Human Rights Day on “Youth Standing Up for Human Rights” is commemorating actually for sensitizing and involving youth being part of groups or as individuals in spite of the challenges they face; to appeal, teach and train them for standing up against hatred acts & aspects and against all forms of discriminations with any citizen, he added more. Naveed Walter said that HRFP will strengthen the networking with youth and all stakeholders for more advancing and effectiveness of HRFP’s Early Warning System for creating a safe & secure atmosphere for their inclusive space to grow & participate for development, peace, justice and human rights.