A Musical film with Urdu Captions on St. Joseph Freinademetz: The First Saint to Ever Serve in Hong Kong 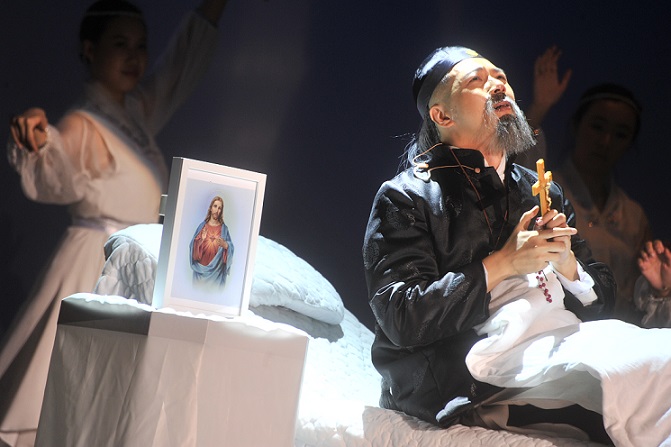 The Executive Producer is Danny Anthony SHIU when this film is presented by Divine Word Missionaries (SVD) while Producer​ is Rev. Joseph TAN Lei Tao, SVD and Director & Screenwriter​ is Ms. Lai Nor NGAN.

Theme Song St. Joseph Freinademetz learned many languages in his life in order to help millions of people in China.  The production team have now recorded the musical’s theme song in 20 different languages, with 27 singers from four continents, in keeping with the multilingual skills of St. Freinademetz himself.

Frequently Asked Questions Q​: What inspired the team to produce a musical on the life of St. Joseph Freinademetz?

A​: It’s all because of Father Joseph Tan, SVD, our producer. When he was just a priest of a parish, he read the letters that St. Joseph Freinademetz wrote to SVD about his difficulties in China, and these letters inspired him to join SVD.  That’s why he had been looking for an opportunity to tell the story of this saint because he wanted more people to be inspired to serve the Lord.  Few years ago, he started a group called the St. Joseph Freinademetz Mandarin community.  In April of 2017, when he was thinking about how he should celebrate the next anniversary of this group, he realized that this might be the opportunity for which he had been waiting for.  Therefore, he decided to stage a musical to honor St. Joseph Freinademetz, his spiritual role model.  Those letters later became the basis for the script of this film.

Q​: What made the team participated in film festivals?  A​: We received some funding that allowed us to rent some industrial cameras to record the entire musical with some professional assistance.  After the post-production work and remaking most of the soundtracks, we showed to a couple people.  They gave us very positive feedback and asked us, “Why don’t you send it out for overseas competitions?  It will tell more people about the musical.  It will help you to achieve the goal of inspiring more people to follow the Lord.”  We really did so and then luckily received an honorable mention at 2019 Gabriel’s Awards organized by the United States and Canada Catholic Press Association.  We also made and will make appearances on three TV networks in Canada, India, and the Philippines.  Now, we are more confident to share our showpiece to the whole world to honor our Lord.

Q​: What makes it different among other musical?  A​: We did most of our things backwards.  We did not plan to show it as a movie when we performed this musical. However, when we watched the recording, we realized it was good enough to show in competitions.  We anticipated placing with a humble heart.  We were pleasantly surprised with some positive feedback.  We did not plan all this on day one.  As we worked, it seemed that the Lord provided us with guidance and ideas as long as we persevered. We did not anticipate going so far with this.  The journey has not yet come to an end.   On the other hand, the team was mostly made up of beginning actors and actresses.  95 percent of the team were performing for the first time. As this is a staged musical recording, they had no opportunity to retake scenes.  Completing a musical at this level, on the first try, with so little experience, is truly a miracle from the Lord.  The musical allows us to tell everyone about the saint’s story that he only had one intention.  He wanted to spread the Divine Word.